Gone to Look for America: An Epic Road Trip (Part 7)

Posted on March 29, 2013 by fromabrooklynbasement

Sunday morning I hit Route 40, headed for Nashville. Saw more highway patrol officers than I’ve ever seen anywhere, including on the Central Coast section of 101. I’ll put it this way: In a really gross Exxon station bathroom an hour or so east of Memphis, someone had scrawled on the back of the door, “Watch your speed. Pigs galore from here to Memphis.” Somehow, I didn’t get a speeding ticket.

Reached Nashville in the early afternoon, driving through the rocky hills of the suburbs and sitting in some traffic that I’ll never know why there was traffic there, because after ten minutes I flipped a bitch and took an alternate route. Checked into my motel, an Extended Stay place where the computer at the front desk went on the fritz with a half dozen people trying to check in, making all the travelers as well as the clerk just utterly miserable. After almost an hour, I got into my room and crashed out for a couple hours.

That evening I went down to the Gulch, a trendy part of Nashville just south of downtown, where I ended up eating a chicken sandwich at an upscale bar/restaurant on the first floor of a condo complex (food wasn’t bad, really cool and friendly bartenders, but you know exactly the kind of place I’m taking about. I could have been in Walnut Creek), where I watched the first half of the NBA All-Star Game (brief interlude: one of the ways you know Blake Griffin is an all-time great dunker is that in the All-Star game, the other players all want to throw him alley-oops). I then went over to the Station Inn, a small but famous live music venue (my friend Stan says he saw Doc Watson play there back in the 70s) that was hosting a free bluegrass jam. There was a sign on the door saying, “We are full, try back at 10 p.m. Please respect this.” Needless to say, I did not respect this. There was nowhere to sit, but I stood in the back of the room and watched across the picnic tables (which, incidentally, were populated with a ton of good-looking woman: this is, happily, a common circumstance in Nashville) while between 15 and 20 musicians (including a little girl who looked to be about 10-years old who was just crazy good on the fiddle) jammed away on bluegrass tunes. 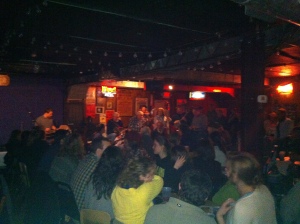 Cruddy picture, but it kinda gives you an idea of the Station Inn.

I drank a Yazoo Pale Ale (locally-brewed, and tasty!) and watched for about an hour before I got sick of standing by myself at the back of the room and went back to my motel.

I should mention that this is the day I got sick of myself. You know how when you travel with another person, after a couple of weeks, no matter how well you get along with that person under normal circumstances, that person will inevitably get on your nerves? Well, I’d been on the road for nearly two weeks, hadn’t seen anyone I knew in ten days, and had covered more than 3,000 miles, spending all that time in the car living in my own head. This was fun early in the trip, when I was excited about the adventure and looking forward to starting the next chapter of my life in Brooklyn. But as the days passed, the positive thoughts started to melt away, and as always when I’m alone, I started to get down on myself, thinking I was making a mistake, I was just wasting my life, I was never going to get anywhere as a writer, I’d never be even a mediocre musician, and on and on and on until I hit the point where, without a travel partner, I was just sick of the road, sick of myself, and ready to get home.

I woke up late, having slept poorly because I kept hearing shady-sounding dudes talking outside my room (which was right next to the stairs) at all hours of the night; I also noticed that the deadbolt on my door was hanging on loose screws, a bad sign in case someone decide to break in and relieve me of my laptop and guitars—you know, the only possessions of value that I have in this world. Anyway, there was no B&E action, and that afternoon I went into downtown Nashville, where I took a tour of the Ryman Auditorium, the famous home of the Grand Ol’ Opry from 1943 to 1974, where Hank Williams performed, where Johnny Cash met June Carter, where bluegrass music was born, the grand cathedral of country music. 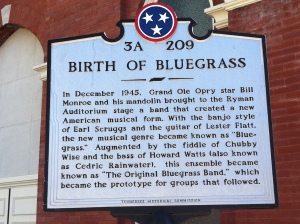 Seriously, where bluegrass music was born. 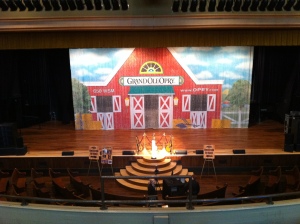 I wanna sing at the Opry

After the Ryman I went next door to Gruhn Guitars, one of the best vintage guitar shops (along with Mandolin Brothers in Staten Island) where I’ve ever spent time pawing deliriously at instruments I couldn’t possibly afford.

Snapped this one for my uncle, who’s obsessed with mandolins

The staff here is borderline hostile—those instruments are worth a lot of money, and I think they get a lot of tourists wandering over from the Ryman who play with them with no intention of buying anything (like me!). It’s not too often I wish I was a dot-com millionaire (that’s a fucking lie; I wish I was a dot-com millionaire everyday), but this was one of those times.

Afterward I walked briefly up Honky-Tonk Row, going into a couple of cowboy boot shops, including one that advertised: “Buy One Pair of Boots, Get Two Free.” (You have no idea how tempting this was, but at $400 a pop, paying for even one pair was out of a question.) With my outrageously expensive parking space ($15 for two hours) about to expire, I picked my car back up and did a plantation tour, as recommended by my friend Kara. The most famous historic plantation in Nashville was not a cotton or tobacco farm, but rather the late nineteenth century’s premiere thoroughbred racehorse farm, Belle Meade. I’ll spare you too much of a history lesson, but Tennessee was once the center of American thoroughbred racing, until the temperance movement took hold, chasing the drinking and gambling north to Kentucky. I took the mansion tour (no interior photos allowed) and wandered the grounds, including having that really awkward moment where the white lady who sold me tickets (who was very nice) told me where the slave quarters (even typing the words “slave quarters” gives me the heebie-jeebies) were located.

After the plantation tour I went over to the Bluebird Café, a restaurant/performance space that has been the premier venue for up-and-coming songwriters in Nashville for more than thirty years. I showed up a half hour early for the show, and took my spot about 200 people from the front of the line. (It turns out that that new TV show Nashville, which I’ve never seen, has filmed at the Bluebird, making it even more famous and difficult to get into than it was before. I tried to get a good photo of the line, but it was just too massive.) I knew I wasn’t getting in, but the girl in front of me in line, a songwriter from Canada named Stacey who spends a week a month in Nashville, told me that if we stayed in line we could get a stamp that guaranteed us entry the next time. I waited a half hour, maybe 45 minutes, got my stamp (I’ll come back and use it in like, five years, once I’ve actually written some songs), and then asked Stacey, who in addition to being really nice and friendly was also just scorching hot, if she had any recommendations on where to go. She told me to check out the Time Jumpers, a sort of all-star group of Nashville session musicians fronted by Vince Gill. It turns out they have a regular Monday night gig at a bar on the south side of downtown, so there I went.

I didn’t want to go back to my hotel, and after my experience at the Bluebird I was worried about the show being sold out, so I went straight to 3rd and Lindsley, paid my $15 cover, and sat at the bar. I killed a couple of hours eating a burger, drinking a couple of Yazoos, and chatting with a tourist couple in town from Honolulu.

The Time Jumpers style themselves as a Western Swing Band. The best description I can come up with is a country Brian Setzer orchestra. Now, as much as I love me some country music, this isn’t exactly my cup of tea, but the musicians (even with a couple of them out sick there were nine or ten in the band) were just incredible. They played so tightly, and with such mastery of their instruments, that even though I was really tired at this point, I ate it up.

The Time Jumpers. Lighting was obviously not good for photos, but that’s Vince Gill in the middle with the guitar.

Also, during intermission, the musicians wandered through the crowd saying hi to the audience, not in a bless-you-with-my-presence kind of way, but in a really genuinely friendly manner. After the show I drove back to my hotel through a torrential downpour, happy to find upon my return that all my valuables were still safe and sound in the room.

Next Time: A whiskey for the road.

This entry was posted in Music, Road Trip, Travel. Bookmark the permalink.

2 Responses to Gone to Look for America: An Epic Road Trip (Part 7)