Posted on May 13, 2013 by fromabrooklynbasement 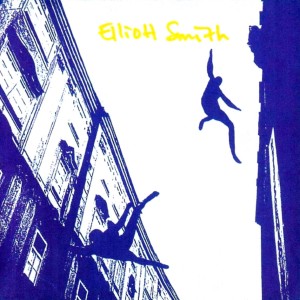 A bleak, nearly monochromatic image of a couple of figures falling (perhaps having jumped?) from a building. Elliott Smith’s name appears to hover in midair in Smith’s handwritten script, barely legible due to its pale yellow color. The image sets the tone for the album, a collection of seriously depressing songs which Smith, 25 at the time, recorded mostly by himself while living in Portland. Kill Rock Stars, an indie label that has distributed albums for Sleater Kinney, The Decemberists, and a number of other musicians from Portland and Seattle, released Elliott Smith in July 1995. The self-titled album is Smith’s second as a solo artist, following Roman Candle, and it was released before Smith became famous thanks to Gus Van Sant using a few of his songs in Good Will Hunting. (Which led to this fabulously strange performance at the Oscars. By the way, Smith lost Best Original Song to Celine Dion and the song from Titanic. The lesson as always: The Oscars are dumb.)

It’s hard to discuss Elliott Smith without getting into the depressing stuff. He was an alcoholic and a heroin addict, and the songs on this album in particular are littered with references to drinking and shooting up. Elliott claimed that the imagery was meant to be more symbolic than to be taken literally as autobiography, but we write what we know, right? And of course, Elliott did eventually commit suicide in the painfully poetic way of stabbing himself in the heart. (Maybe. Many of Smith’s friends believe he was stabbed by his girlfriend, and the LAPD never closed the case. For what it’s worth, I tend to think that if anyone out there was a suicide risk, it was Elliott Smith. I mean, look at that album cover.)

The pounding strum of Smith’s insistent acoustic chords on the album’s most famous track, Needle in the Hay. You can hear a bit of fuzz in the background, indicative of the lo-fi recording. Hear it for yourself (along with the entire rest of the album) here.

A slowly strummed, pretty acoustic chord that ends The Biggest Lie. (Note: normally I try to link to every track in an album, but since I just gave you the whole thing, this time I’m not going to bother. But, you should know there are tons of great videos of Smith performing these songs live, like this, and you should totally spend the rest of today listening to as many of them as you can.)

Much as the the album cover and its reference to falling and possibly suicide begins to set the tone for what’s to come, the lead track, Needle in the Hay, takes the listener to a dark place. It’s darkly beautiful, mind you, with that acoustic guitar that’s almost but not quite playing a punk riff, to Elliott’s whispered melodic vocals. But the lyrics are disturbing, a tale of a damaged, drugged-out boy “strung out and thin/trying to cash some check” who betrays distrust of friends “who don’t have a clue” and parents who “ought to be proud that I’m getting good marks.” I don’t want this whole write-up to be a meditation on Elliott’s drug problems or his suicide, but it has to be mentioned again here because Needle in the Hay is perhaps most famous for providing the soundtrack to the this scene in The Royal Tenenbaums.

Track two, Christian Brothers, takes the anger of Needle in the Hay and ramps it up, stripping away the poetic beauty of the previous track for a more naked aggression, with lyrics like “fake concerns is what’s the matter, man/and you think I ought to shake your motherfucking hand,” and the refrain, the drawn out “nightmares become me, it’s so fucking clear.” The title of the song is a reference, of course to Christian Brothers brandy.

The alcoholic theme continues with Clementine. The song is much slower, a lullaby for a passed out drunk: “They’re waking you up to close the bar.” It’s a piece of clever songwriting, as the narrator hears the bartender singing “Clementine” as he closes up shop, and once he’s removed from the bar, Elliott sings, “Oh my darling/Oh my darling/Oh my darling, Clementine,” though in an entirely different melody from the original, before finishing with the sad reply, “Dreadful sorry, Clementine.”

Track four speeds up with another piece of inspired, angry songwriting, Southern Belle. The song features a fast picked, almost out of control intro, with the vocals coming at first in Elliott’s classic near-whisper, with the lyrics “Killing a southern belle/Is all you know how to do/That and give other people hell/It’s what they expect from you too.” At first glance, the lyrics again appear to be from the perspective of a disenchanted young man, feeling isolated from the southern town where he lives. But a deeper reading reveals something more sinister (yes, more sinister than the notion of murdering a debutante). When you consider that Smith moved from Portland to Dallas as a child when his mother married his stepfather, and that Smith claimed that he was sexually abused by his stepfather, the lyrics: “How come you’re not ashamed of what you are/And sorry that you’re the one she got” take on further power. In this reading, the Southern Belle being killed is actually Smith himself. (Elliott had a tattoo of Texas on his arm, about which he said: “I didn’t get it because I like Texas, kind of the opposite. But I won’t forget about it, although I’m tempted to because I don’t like it there.”). Kind of gives some insight into why he was so fucked up, huh?

The next track is Single File, which begins with a haunting, echoing electric guitar played over a medium fast strummed acoustic guitar. The verses are classic disillusioned Smith lyrics, with lines like “There’s a price you’ll pay for/Trying hard to become whatever they are/and say whatever they say.” The chorus again addresses an “idiot kid” who’s “arm’s got a death in it,” a reference to either drugs or the threat of violence.

Track Six is the slow, lovely Coming Up Roses, which features poetic yet disturbing lyrics like “The moon is a sickle cell/It’ll kill you in time/Your cold white brother riding your blood/like spun glass in sore eyes,” which evoke the moon as both a beautiful and threatening symbol. The chorus, “You’re coming up roses everywhere you go,” seems ironic to me.

We’re now in the slow, quiet, middle stretch of the album, which continues with Satellite, a fingerpicked, almost whispered song that features the great lyric “Cause your name’s a drop of ice in my vein,” and then Alphabet Town, a blue harmonica-laced track about feeling lonely in Smith’s hometown of Portland (The streets in much of downtown Portland are named in alphabetical order, from Burnside to Couch to Davis, etc. (they also–non sequitur alert!–provide the names for several Simpsons characters: Flanders, Lovejoy, and Quimby)). I used to love to listen to Alphabet City while I drove in the rain, remembering the time I spent in Portland.

The album speeds up with the ninth track, and my personal favorite, St. Ide’s Heaven. It’s a fast tune on which Elliott strikes power chords while he sings, “Everything is exactly right/When I walk around here/Drunk every night/With an open container from 7-11/In St. Ide’s Heaven.” It’s a song about getting drunk and high (the chorus is “High on amphetamines/The moon is a light bulb breaking”), but instead of being downbeat, it’s defiant, gleefully flipping the bird at anybody who would judge you for your delinquency.

Elliott dials down the tempo for the last three songs. Track ten is Good to Go, a story of following a “low riding junkie girl” around New York, with the sad refrain “I wouldn’t need a hero, if wasn’t such a zero/Good to go/All I ever see around here is things of hers that you/Left lying around,” and the sadder closing line, “All I ever see around here is/I’m waiting for something that’s not coming.”

Track Eleven is the ghostly The White Lady Loves You More, a heroin song on par with anything Lou Reed ever wrote, and the final song on the album is The Biggest Lie, a ballad in which Smith  plaintively sings, “Oh and we’re so very precious you and I/And everything you do, makes me want to die/I just told the biggest lie.”

My favorite, and most of my friends who are hardcore Elliott fans concur,  is St. Ide’s Heaven. But because it’s the most famous tune, it leads the album, and sets the tone for the whole record, Needle in the Hay is pretty clearly the signature track.

In part because of the impressionistic quality of the songwriting, I don’t know that the albums has a singular signature lyric, but there are two that stand out to me. The first is the opening of St. Ide’s Heaven, which is so good that even though I already quoted it once, I’m going to again:

“Everything is exactly right
When I walk around here, drunk every night
With an open container from 7-11
In St. Ide’s Heaven.”

The second is the final verse of Needle in the Hay:

“Now on the bus
Nearly touching this dirty retreat
Falling out 6th and Powell a dead sweat in my teeth
Gonna walk walk walk
Four more blocks plus the one in my brain
Down downstairs to the man
He’s gonna make it all OK
I can’t beat myself
I can’t beat myself
And i don’t want to talk
I’m taking the cure so I can be quiet
Whenever i want
So leave me alone
You ought to be proud that I’m getting good marks.”

That last line in particular is just killer, the double entendre of marks meaning either grades in school or trackmarks in a junky’s arm.

Elliott’s albums tend to be split into two categories: The early ones he recorded by himself in Portland, composed of acoustic guitar, vocal, and little more (Roman Candle, Either/Or), and the later ones he recorded in New York and Los Angeles studios that feature lush, Beatles-influenced multi-instrumental arrangements (XO, Figure 8). Elliott Smith is obviously in the former category. It’s a simple and beautiful album, although it can be a hard one to listen to. And it’s been a very hard one for me to write about. I don’t want to focus on the depressing aspects of the songwriting, but I kind of can’t help it, and to discount that element would be dishonest anyway. I’m not going to stab myself in the heart with a kitchen knife, but I can be a pretty fucked up, depressed person, and a big part of why this album speaks to me is because it is so fucked up and depressing. I trotted this line out last week when I was talking about Ryan Adams, but my favorite songs are sad songs, because when you’re sad, nothing makes you feel better than listening to a sad song and knowing you’re not alone, knowing that Elliott Smith knows how you feel.

I also love this album because it’s imbued with a sense of place. These songs feel like Portland (a city where I lived, albeit briefly, in the early aughts); not the cutesy hipster Portland we see in Portlandia (don’t get me wrong, I love that show, but you know what I mean), but the dark, gritty, rainy, sketchy Portland of Drugstore Cowboy. That’s my Portland. Hell, that’s my world. And nobody wrote better songs about it than Elliott Smith. RIP.

A final note: If you liked this and want to learn more about Elliott, go check out Sweet Addy. It’s a wonderfully curated site that’s bursting with love.