Posted on June 10, 2013 by fromabrooklynbasement 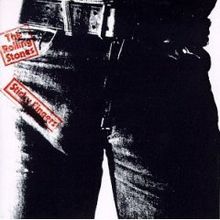 Truly one of the all-time iconic rock ‘n’ roll album covers, the image of a bulging crotch (the natural assumption is it’s Mick Jagger’s, though Warhol claimed it isn’t, and the exact identity of the model has never been verified) with an actual working zipper installed in the pants was the idea of pop artist Andy Warhol. The innuendo behind “sticky fingers” should be obvious, as the Stones continued to push the boundaries of late ’60s/early ’70s cultural acceptability. The Stones recorded much of Sticky Fingers (listen here) at the famous Muscle Shoals studio in Alabama in 1970, during their absolute creative peak, and it was released in 1971.

A chorus of strings fading out the final note of the extended instrumental outro of Moonlight Mile. If Sticky Fingers begins with a look-at-me roar in Brown Sugar, Moonlight Mile brings the album to a close with a sigh of exhausted content.

The loud, brash, rollicking Brown Sugar, one of the Stones’ most famous songs, kicks off the album. There are so many things that make this song unique–the tuning Richards uses on his 5-string guitar; Jagger’s vocal delivery, bordering on unintelligible, which probably kept him from being burned in effigy for his lyrics; Bobby Keys’ saxophone solo intertwined with Mick Taylor’s sharp lead guitar licks. But it all goes back to that opening guitar riff, the one any rock ‘n’ roll fan will recognize instantly.

Next is the slow, almost spacy jam Sway, with the great echoing chorus, “It’s just that evil wine, that’s got you in its sway,” and the long outro guitar solo by Taylor, which doesn’t get mentioned among great guitar pieces nearly as often as it should. (Random aside: I saw Cat Power do a cover of this at Outside Lands one year, and it was awesome.)

Track three is the incomparable Wild Horses. I can get a little (okay, a lot) hyperbolic in these write-ups, but this really is my favorite song of all-time. I love everything about it: the slowly strummed acoustic intro and rhythm track, the tone of Jagger’s voice, the lyrics about the lost soul looking for something left behind (Keith Richards wrote the initial version of the song about having to leave his newborn daughter to go on the road); the tinkling piano (which was not, as some believe, played by Gram Parsons on the Stones’ version–though Richards did give the song to Parsons, who recorded a great version with the Flying Burrito Brothers); and Taylor’s electric lead, which isn’t fast or flashy, but on which every single note rings in perfect timing and tone. I love this song so much I once gave a homeless guy with a guitar $20 to play it for me on my birthday, and I made it the centerpiece of a short story I wrote in grad school (which I’ll link here if it ever gets published).

The next song is the extended jam Can’t You Hear Me Knocking, which features Richards again providing an alternate-tuned riff over which Taylor plays a wailing solo that may be the best guitar piece in the entire Rolling Stones catalog. Side A ends with You Gotta Move, a slow blues with a fucking dirty (and I mean that in the best way) slide guitar riff and a slinky vocal which sounds like it’s being sung by a bar-room pimp. This song would fit in the dirtiest basement bar in Mississippi.

Side B opens with the up-tempo, rocking Bitch, a great song to listen to whenever you share Jagger’s sentiment that, yes, “love is a bitch.” Next is I Got the Blues, another slow blues which features a killer horns section and organ solo.

The final three songs on the album are all iconic Stones tracks. The first is Sister Morphine, a dark, haunting heroin-inspired acoustic song about lying in a hospital bed following an overdose. The next is the country-infused Dead Flowers, a from-the-other-side-of-the-tracks tune from the perspective of a drug addict looking at the happy life of a rich woman he once loved. This song is so good that Townes Van Zandt, one of the greatest songwriters who ever lived, covered it (and the Coen Brothers used his version in the final scene of The Big Lebowski). The album closes with the multi-layered, utterly gorgeous Moonlight Mile, a song which, with its epic string arrangement over marching drum rhythm, sounds unlike anything else in the Stones’ catalog.

Most people would say Brown Sugar, but this is my Desert Island Album list, goddammit, so it’s Wild Horses, and you’re not allowed to disagree with me.

The signature sound is certainly that of Richards’ open-G tuned guitar, from which he wrangled the album’s most distinctive riff, the intro to Brown Sugar. But the signature lyric? That’s tougher. “Wild horses couldn’t drag me away”? “Brown sugar, how come you taste so good”? How about “I won’t forget to put roses on your grave” from Dead Flowers? It’s one of those, probably the Brown Sugar one, although my favorite will always be Wild Horses. The whole song.

The Stones, much like the Beatles, are a hard band to pick just one album from. One of the tricky things about a Desert Island Albums list is limiting yourself to a single album from each of your favorite bands. In the late ’60 and early ’70s the Stones released, consecutively, Beggar’s Banquet, Let it Bleed, Sticky Fingers, and Exile on Main Street, a four album-run that only the Beatles and maybe Led Zeppelin can compete with. Exile, in particular, is the album most people choose as the Stones’ best, and if I stretched my Desert Island series to twenty records, it’d definitely be on the list. I love Exile and Sticky Fingers because they are the albums on which the Stones explore country music, with tracks like Wild Horses, Dead Flowers, Sweet Virginia, and Torn and Frayed; these are pretty much all of my favorite Stones songs. (A brief-ish aside: When I compare the Beatles and Stones, I think of the Beatles as the more revolutionary sonic experimenters, but the Stones explored the genres of American music further–the Beatles don’t have a blues like Ventilator Blues, or a country song like Dead Flowers. When I was younger, I preferred the experimentation and the optimism of the Beatles. As I’ve gotten older, I’ve turned more to the traditional appeal and darkness of the Stones.)

This entry was posted in Desert Island Albums, Music. Bookmark the permalink.