On the Supreme Court and Self-Contradiction

Posted on June 27, 2013 by fromabrooklynbasement

I’ve always felt that the easiest way to explain the difference between liberals and conservatives in America, at least when it comes to social issues, is that if you think the 1960s (the Civil Rights Movement, protests against the Vietnam War, Free Love, etc.) were good, you’re a liberal; if you don’t, you’re a conservative. It’s reductive, and has nothing to do with economics (you have to go back at least to the New Deal for those arguments), but as a rule of thumb, I think it’s pretty solid. Take me, for example: My mom was a bra-burning anti-war protestor, and my dad went to Woodstock, so it follows that I became a liberal.

I bring this up because the Supreme Court made two decisions this week, one awesome, one asinine, that I think we can understand in part through the prism of the ’60s.

First, there’s the unconscionable decision to overturn section 4 of the Voting Rights Act. I’m no lawyer, and there are lots of places you can go on the internet to get a full analysis, but in short, section 4 put the burden on counties in a few states in the deep south with histories of voter suppression to prove that their current laws weren’t discriminatory. The Justices, in a 5-4 decision that, shockingly, went along party lines, overturned this section, saying that it was punitive for past wrongs these states had committed and that it did not reflect current reality. Saying, in essence, that racism is no longer a problem in America.

This is, of course, an unfathomable pile of horseshit. Calera, Alabama, a city in the very county that was the plaintiff in this case, was guilty just a few years ago of redrawing its districts to remove the only black member of its city council. Immediately after the Court’s ruling yesterday, Texas moved forward with a harsh Voter ID law that would never have survived the scrutiny of the old Voting Rights Act. Voter ID laws are designed to suppress turnout of poor and minority groups–groups that vote for Democrats.

As someone who believes that the ’60s were a good thing, this pisses me off. The Voting Rights Act is arguably the most important piece of legislation of Lyndon Johnson’s Great Society. And, as John Lewis, the longtime Georgia congressman and Civil Rights leader, said, the Court “put a dagger in the heart of the voting rights act.” The people who were beaten and intimidated and who fought so hard against literacy tests and poll taxes just had their biggest victory stripped away. It’s a sudden rollback of 50 years of progress.

If anything, the Supreme Court was right about one thing: It’s not fair that southern states need to bear the burden of the Voting Rights Act. EVERY STATE should have to do it. In the last couple of elections, the governments of major swing states Ohio and Pennsylvania have engaged in Jim Crow-esque behavior to suppress voter turnout among minorities. But our current, impossibly incompetent Congress will never pass a new, more comprehensive law, meaning the Voting Rights Act is effectively dead. This same Congress, by the way, renewed the Voting Rights Act by landslide margins, not that it mattered to the unelected members of the Supreme Court. Next time someone talks about “activist judges,” please point to this decision as yet another piece in a long trail of evidence that Conservative judges are just as “activist,” if not moreso, than liberals. If there are any typos in that last paragraph, it’s because my hands are shaking with rage.

Of course, yesterday the Court turned around and struck down the Defense of Marriage Act, while also electing to not take up the challenge to Proposition 8, thereby upholding a lower court ruling that same-sex marriages could not be banned in California. It’s a victory for marriage equality, and it also meant they got to have a hell of a party in San Francisco yesterday. 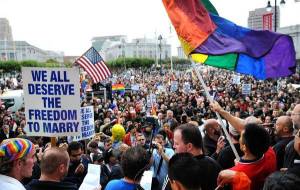 I wish I’d been there

The DOMA ruling is much more in the spirit of, well, good, than the VRA ruling. But it’s not a complete victory. As I understand it (and please correct me if I’m wrong), other states can still pass anti-gay marriage laws, and those will have to go through the appeals courts as Prop 8 did. Prop 8 was struck down by San Francisco’s famously liberal 9th Circuit Court. Do you think the conservative 5th Circuit in New Orleans would rule the same way? And remember, the laws that court will be looking at will likely have an extreme conservative bent, as they will have been passed by legislatures from states that can go back to suppressing minority voters because they don’t have the protection of the Voting Rights Act anymore.

In the case of DOMA, the Court saw the way history was going, and rolled with it; in the case of the VRA, the Court attempted to turn back history. So why did the Supreme Court make these two dissonant decisions? Fuck if I know. And I’m not reading the opinions to figure it out, because, seriously, have you ever tried reading a court opinion?

My point is that we can all go ahead and celebrate the societal step forward that the DOMA ruling represents, but the VRA ruling is a reminder that no gain is permanent, and a step backward can come at any time.

This entry was posted in Current Events and tagged DOMA, Prop 8, SCOTUS, VRA. Bookmark the permalink.

4 Responses to On the Supreme Court and Self-Contradiction