Posted on July 8, 2013 by fromabrooklynbasement 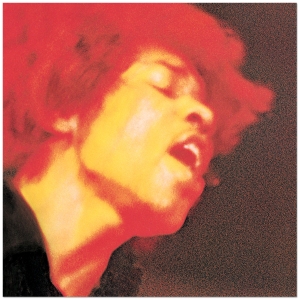 This is a fun one. The above was the cover that Reprise Records chose, a blurry red and yellow headshot of Hendrix. What Jimi wanted to use was the photo below: himself and Experience bandmates Noel Redding and Mitch Mitchell sitting with some kids on an Alice in Wonderland sculpture in Central Park. Fun fact: the photo was taken by Linda Eastman (the future Mrs. Paul McCartney).

Hendrix’s preferred choice for the cover … in a CD jewel case! Remember CDs?

And this isn’t even the most famous alternate cover. Track Records, which had the rights to Hendrix’s work in England, ran a double-sided cover featuring nineteen naked women.

Hendrix disavowed this cover. I suppose the fight just goes to show that everything was complicated for Jimi in 1968, when Electric Ladyland, his third studio album, was released.

A heavy drum and staticky background noise, followed by a deep, unintelligible, alien voice on the intro track …And the Gods made Love. Hendrix was nothing if not a sonic pioneer and experimenter. If you think of Electric Ladyland as more than just a massive 16-track double LP, but also as a world unto itself, the sonic landscape of Hendrix’s mind, then this track plays the role of a Big Bang-style moment of creation.

The fading out of the supernatural outro guitar solo of Voodoo Child (Slight Return) a sound that no other guitar player, no matter how awesome, has ever been able to perfectly replicate.

The aforementioned intro track leads seamlessly into Have You Ever Been (To Electric Ladyland), a dreamy song with a high, almost falsetto vocal and a guitar that sounds underwater, a sound no other guitarist creates quite so effectively. Hendrix sometimes spoke of his music and fans as being part of an “electric church,” and this song, with its evocation of angels and “electric love” feels, in that context, like a gospel tune.

The next track is the breezy, witty Crosstown Traffic, a lyrical metaphor Hendrix uses to describe an affair, backing it up with a guitar riff that sounds almost like a series of gridlocked horns honking.

Things take a turn for the epic with Voodoo Chile. It’s not as famous as the album’s final track, Voodoo Child (Slight Return), but it may be the definitive Hendrix song–a blues from outer space. It’s also maybe the craziest studio song in Hendrix’s catalog, a fifteen-minute epic in which he trades insane blues guitar licks with organ solos from the great Steve Winwood (then a member of Traffic). Voodoo Chile was born out of an all-night jam session, and you can feel the exhaustion at the end of the song. I would give pretty much anything to have been in the studio when this was recorded.

Side 2 of the record opens with Little Miss Strange, a Brit-pop song written by bassist Noel Redding, who plays rhythm guitar on the track. It’s not a terrible song, but it feels a little derivative of its genre, and doesn’t stand the test of time the way Jimi’s songs do.

Next is Long Hot Summer Night, which features a rapid fire main riff that has long haunted me, a riff that feels like it’s going to melt the walls, like the heat of an August New York City night. The lyrics tell of a girl who’s gone away, but has changed her mind and is coming back to Jimi. The closer she gets, the hotter it feels.

Hendrix goes back to the blues on Come On (Part I), a cover of a 1960 Earl King song. It’s an uptempo jam, with instrumental sections reminiscent of the Experience’s recordings of Driving South.

Next is the uptempo but melancholy Gypsy Eyes, a song Hendrix wrote about his mother, who cheated on Jimi’s father and abandoned her son. (“I remember the first time I saw you/The tears in your eyes look like they’re tryin’ to say/Oh little boy you know I could love you/But first I must make my get away/Two strange men fightin’ to the death over me today.”)

The final track on Side 2 is Burning of the Midnight Lamp, which Hendrix wrote on a long late-night flight. The song is most notable as the first one on which Jimi used a wah wah pedal, an idea his friend and rival Eric Clapton had pioneered shortly before on Cream’s Tales of Brave Ulysses. (Jimi also plays harpsichord on the song. Harpsichord!)

Side 3 opens with the groovy Rainy Day, Dream Away, on which Hendrix trades jazzy licks with a sax played by Freddie Smith. The song also features Buddy Miles sitting in for Mitch Mitchell on drums, as well as a Mike Finnigan organ solo. It’s one of my favorite rainy day songs, for the way Hendrix sings, “Rainy day, dream away/Let the sun take a holiday/Flowers bathe and I see the children play/Lay back and groove on a rainy day.”

Rainy Day, Dream Away transitions seamlessly into 1983 … (A Merman I Should Turn to Be), a 13:39 second jam on which Hendrix makes his guitar sound like it’s both under water and in outer space, and which features flute work from Chris Wood of Traffic. 1983 transitions into Moon, Turn the Tides … Gently, Gently Away, a sprinkling of staticky sound moving from one channel to the next. That’s the end of Side 3, but Side 4 opens with Still Raining, Still Dreaming, which was recorded in the same session as Rainy Day, Dream Away. I think that now, living in times where we don’t have to flip over vinyl discs to keep our albums playing, it’s best to understand these four songs together as a single psychedelic dream.

The next track is House Burning Down, Hendrix’s reaction to the race riots of the summer of 1968, a period that saw several major American cities, including Detroit and Newark, engulfed in flames. (Fun fact: These riots are also the subject of the Beatles’ Blackbird.)

The final two songs are the most recognizable on this, and just about any, album: First is All Along the Watchtower, Jimi’s incendiary Bob Dylan cover. Actually, recognizable doesn’t do this song justice: Everything about it is legendary. The distinctive rhythm played on 12-string guitar by Traffic’s Dave Mason, the searing tone of Hendrix’s strat, the wail of the slide guitar (which Hendrix played with a zippo), and the apocalyptic lyrics, which Jimi sings with aplomb and accentuates with the lightning outro solo. It’s the greatest cover ever (the only possible argument is Aretha Franklin’s Respect), one that’s so great that Dylan began arranging the song a la Hendrix after he heard Jimi’s version.

If it’s possible for a song to be more distinctive than Watchtower, it’s the album-closer, Voodoo Child (Slight Return). Put simply, if aliens came to earth and we had to win a guitar battle to save the human race, I would want our champion to be Hendrix the moment he starts pumping the wah wah pedal and picking that famous opening riff. That probably wasn’t the simplest way to put that.

When I was a freshman in college, a bunch of my good friends made Top 25 lists of what we thought were the greatest rock songs of all time. Watchtower was Number One on my list. If I made that list again today, more than a dozen years later, it would look pretty different–but Watchtower would still be in the top spot. It’s pretty hard to top the greatest guitar player ever performing a song written by the greatest lyricist ever, no?

The most famous line on the album is probably the opener of Watchtower: “There must be some kind of way out of here, said the joker to the thief.” But I kind of want the signature lyric to be one written by Jimi himself. So how about the opener to Voodoo Child (Slight Return): “I stand up next to a mountain/And I chop it down with the edge of my hand”? Or the line from the second verse, “If I don’t meet you no more in this world/I’ll see you in the next one, and don’t be late,” which takes on an unexpected poignance due to Hendrix’s tragic death.

I kind of can’t believe I got all the way to my eighth Desert Island Album before doing a Hendrix record. I started playing guitar because of Jimi. He’s the guy that other guitar gods unanimously point to when they’re asked who’s the best; he’s on a different planet from anyone else. Electric Ladyland is the apotheosis of Hendrix’s sonic exploration. His other albums are great: Are You Experienced features so many amazing songs–the dreamy May This Be Love, the wistful The Wind Cries Mary, the sexy Foxy Lady, the acid-fueled Purple Haze; and Axis: Bold as Love has several of my personal favorites–the introspective Castles Made of Sand, the screaming Bold as Love, and especially the mind-blowingly beautiful Little Wing. Hendrix was always searching for a way to express the sounds in his head through the guitar, and the expansive Electric Ladyland is the album on which he came the closest to giving full form to that goal. It’s a cruel shame that he didn’t have more opportunity to do so.