The Meaning of a No-Hitter

Posted on July 16, 2013 by fromabrooklynbasement

There is nothing else in sports that makes you drop what you’re doing and sprint for a TV like the words “no-hitter.” This is true no matter who is pitching, but if the guy throwing the no-no happens to play on your team, there’s nothing that’ll stop you from catching that final out.

On Saturday night, I was at a friend’s house in Salt Lake City, where the day before I’d gone to his wedding reception. I was scheduled to take a red eye flight back to New York at midnight, and we were killing time by watching the Oakland A’s play the Boston Red Sox, which happened to be the nationally broadcast game on the MLB Network. My friend’s baseball loyalties are similar to my own–we like both the A’s and the Giants, and tend to watch whoever is playing at the moment (admittedly, I have swung more toward the Giants in the last few years), and even if we’d had a choice, we probably would have watched the A’s game, pitting the teams with the two best records in the American League, over Giants-Padres, a battle to stay out of the NL West cellar.

A’s-Red Sox was close and well-played, and I noticed that the Giants went up big early, so I stopped thinking about that game. Then, just as we were leaving my buddy’s house to head to the airport, I saw the MLB Network ticker flash something along the lines of “Lincecum No-Hitter through 6 IP.” This piqued my interest, of course, but I wasn’t ready to drop everything to follow it; as a general rule, I don’t get really excited about a no-hitter until a guy gets through 7, and given how inconsistent (which, really, is being kind) Lincecum has been over the past season-and-a-half, I wasn’t about to hold my breath–even against the woeful Padres.

A few minutes later, as we drove to the airport, I checked my phone. Lincecum was through 7. Uh oh.

A friend in California texted me, saying that it would probably need to be a combined no-hitter if it was going to happen, as the undersized Lincecum had already thrown 114 pitches to get through the 7th. Bullshit, I thought. If Timmy was a rookie, a prized young arm, maybe; but he’s in his seventh season in the Big Leagues, is clearly past his prime, is in the final year of his contract before free agency, and had a chance to do something historic for himself and the Giants. Bruce Bochy was going to let him pitch until he gave up a hit or his arm came flying off his body. And, for the reasons I just outlined (plus the fact that the All Star break is this week, meaning a bunch of extra days off in between starts), I was 100% fine with that.

I told my buddy to keep texting me updates. I was sliding my bag through the TSA X-ray machine as Lincecum threw his 131st pitch, which Padres outfielder Alexi Amarista flared to right. Hunter Pence came in on the ball and made a diving catch, the sort of sparkling defensive play that seems to happen at least once in every no-hitter, to end the 8th. Once I was through security, I ran to the first seat I could find, broke out my laptop and fired up the internet. Fortunately, the Salt Lake City airport has free, easily accessible WiFi, and I have MLB.TV. I’ve barely used the service this year, but I will never complain about spending $130 for it, because I got it open in time to see Yonder Alonso step to the plate with two down in the ninth, the last man between Lincecum and his history. I happened to load the Padres broadcast, and their announcers didn’t say a word the entire at-bat, letting the crowd noise do the work. The Giants fans at Petco Park (and it sounded like there were a lot of them) chanted “Timmy, Timmy” as he got two quick strikes, Alonso flailing at a couple of filthy off-speed pitches. Alonso took a high fastball and then a ball in the dirt to even the count 2-2, fouled a pitch off, and then, on Lincecum’s career-high 148th pitch of the night, lifted a lazy flyball to left, which settled easily into the glove of Giants leftfielder Gregor Blanco for the final out. Lincecum’s reaction was classic Timmy: Most pitchers go nuts when they throw a no-hitter, but Lincecum just gave a casual fist pump, until Buster Posey came running up from behind and crashed into him, at which point Timmy burst into an almost sheepish grin. 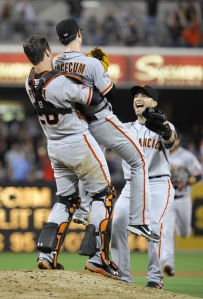 No-hitters come from out of the blue, and the joy that comes with them is so sudden that it wipes away everything bad that came before it. It’s been a miserable season for the Giants, as their World Series title defense has unraveled amid a slew of injuries, poor play (the team has the worst record in the Majors since June 1) and disappointing pitching. That last part is especially true of Lincecum, who has gone from a Cy Young-level dominator to a wildly inconsistent enigma over the last couple of years.

But none of that matters now. No matter how badly the Giants play the rest of the year, 2013 will be the year Timmy threw a no-hitter. And if he leaves the team as a free agent after this season, and we never again see the team’s most iconic player from the post Bonds era, this game will be the final crown jewel in his Giants career, right up there with the Cy Young Awards and the 2010 World Series-clinching masterpiece. No matter what else happens, Timmy gave us a moment of joy, a moment that will define this season for Giants fans. That’s the meaning of a no-hitter.

2 Responses to The Meaning of a No-Hitter