Posted on July 19, 2013 by fromabrooklynbasement

Last Saturday night, a Florida jury acquitted George Zimmerman of murdering 17-year old Trayvon Martin. By an almost perverse coincidence, the verdict came through the night after the release of Fruitvale Station, a film that dramatizes the final day in the life of Oscar Grant, the 22-year old Hayward, California man who was shot in the back and killed by a BART cop, while pinned face down, on the Fruitvale Station platform in the early hours of New Years Day, 2009. 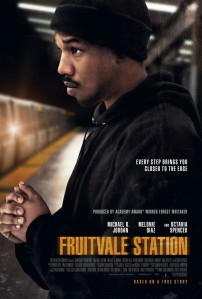 I’d been looking forward to Fruitvale Station since I’d heard, probably a year ago that it was being made. I lived in Oakland when the Oscar Grant shooting happened, just one BART stop away from Fruitvale. I occasionally shopped at the Farmer Joe’s Market where Oscar worked, which appears in the film. I had a couple of friends riding on the Fremont BART line that night who were delayed hours getting home, though they weren’t on the same train and they didn’t know why they’d been delayed until the next day. And I remember sitting in my office watching the verdict come in against Johannes Mehserle, the BART cop who killed Grant, manslaughter instead of murder, and knowing that there was going to be a riot in downtown Oakland that night. Plus, on a minor note, I was optimistic about the casting of the film, in particular that the role of Oscar Grant went to Michael B. Jordan, who played Wallace so memorably on the greatest television show of all time, The Wire.

I saw Fruitvale Station last night, and it didn’t disappoint. It’s not a perfect film: The movie makes concessions to show that Oscar isn’t perfect (he threatens the grocery store manager who fired him, and there is a flashback scene showing him in San Quentin, which is not a place you end up by accident), but he still comes off just a bit too saintly, I think (there’s a scene involving a dog being hit by a car that works as a metaphor–think of the dog as Oscar–but feels like a bit of an overkill if taken as a literal event). The film’s also heavy handed with the foreshadowing at times, especially since the first scene you see is a cell phone camera recording of the shooting, leaving no doubt how it’s going to end. But considering that it’s 27-year old director Ryan Coogler’s debut, I don’t think you could ask for much more, because it is so viscerally, emotionally impacting.

Fruitvale Station is the rare film in which the actual experience of watching the movie feels important. (The other movie I remember feeling this way about was Brokeback Mountain; when I saw Brokeback at the Dome Theater in Concord, California on the night it opened there in 2005, there were news vans parked in front of the theater. It’s interesting how mainstream attitudes toward gay people have changed in the last eight years, huh?) When the real life cell phone footage is shown at the beginning of Fruitvale Station, a number of people in the audience gasped at the gunshot. Then, toward the end, when the scene is reenacted, people gasped again, even though they knew it was coming. This is not the cartoon violence we see in action movies–it’s a portrait of what violence is really like, what it does to real people, in this case a flawed but fundamentally good person we’d spent the previous hour getting to know pretty intimately.

The actual shooting isn’t even as emotionally challenging as the aftermath. After being shot (the bullet, if you read the reports, went in his back, hit the cement platform and then ricocheted back into his chest), Oscar was taken to Highland Hospital, the trauma center where all gunshot victims in Oakland go. He was shot around 2:15 a.m. and died around 9:15 a.m., and the two most devastating moments in the movie involve two mothers: First, Oscar’s mother (played by Octavia Spencer, who is great), who takes a long walk down the hospital hallway to look at her dead son laid out on a slab; and then by Oscar’s girlfriend, the mother of his four year-old daughter, who is left staring blankly, with no idea what to say, when her child asks, “Where’s Daddy?” (I watched the audience file out of the theater after the film, and very few had dry eyes. Some were openly weeping.)

It is the vision of these mothers that stay with me as I walked into the night, as I type this now. In the film, Oscar’s mother tells him to take BART to the City for New Years, reasoning it’ll be safer than driving. And I think of Trayvon Martin’s mother, who surely didn’t think there was any danger in him walking out to the store for a pack of Skittles. Unfortunately for these mothers, and their sons, it wasn’t safe.

It wasn’t, and isn’t safe, mainly because of what the great David Simon called, in his response to the Zimmerman acquittal, “the lewd, pornographic embrace of two great American pathologies: Race and guns.”

For me, the element of race was driven home almost immediately. After leaving the theater, my friend Luke and I walked to the nearest subway station, and at the bottom of the stairs we encountered a pair of NYPD officers manning an unannounced checkpoint, with a sign that said: “All backpacks and large bags are subject to search.” Luke had a messenger bag, I had a backpack. We are both skinny, non-threatening white guys, so of course they didn’t search us. I knew they wouldn’t, and I actually wanted them to, even though I’m generally against this sort of personal invasions, just to prove me wrong. But of course I was right, and I have little doubt that if we were black, or, in this case, Middle Eastern, we would have been searched.

The thing is, our government puts in place these sorts of searches, which drip with the potential for racial profiling, at the same time that it prevents any effective regulation of guns, even after the spate of mass shootings we’ve seen in the last couple of years, including the murder of more than twenty school children in Newtown, Connecticut (and really, if that didn’t force a change, nothing ever will). Republicans in congress are so beholden to the NRA that they refuse to curtail gun purchasing rights even for people on the FBI’s terrorist watch list.

To take it even further, the NRA lobby’s (and make no mistake, the NRA defends the Second Amendment not out of Constitutional principle so much as to defend the gun manufacturing industry’s profits) hold on Federal and state government is so strong that it has been able to push through numerous legislatures the exact Stand Your Ground law that helped to acquit Zimmerman.

So we’re left to live in a country with laws that are so screwed up that juries can acquit George Zimmerman, who accosted an innocent kid and then shot the kid after he reacted the way I know I would have if I were in his shoes, or can convict Mehserle of a lesser crime than murder, with a sentence so light that he’s already out of prison, and these juries will have actually made the correct ruling. Unbelievable.

What’s more, we live in a country that values the lives of young black men so little that millions of people, as Luke said to me after the movie, can hear about the death of an Oscar Grant or a Trayvon Martin, and say something along the lines of, “Well, he was probably up to no good.” Maybe racism isn’t the same as when a Mississippi jury took an hour to acquit the killers of Emmett Till, but it still exists in our institutions, is in fact something that our institutions have been built upon. I’m not a black man, but if I were, you’d better believe I’d remember that every time I left the house. And if I were a black parent, I’d think about Trayvon and Oscar before I let my kid out of the house at night. Much of our society is built on an illusory notion of safety, but if you’re a young black male, you can’t even kid yourself: You’re not safe.

There’s one more image that sticks with me from Fruitvale Station: When Oscar is in surgery at Highland Hospital, we see the trauma surgeon remove the bullet from his chest. It’s such a small thing, that bullet, such a small thing to take another young black man’s life. It’s something that has to stop.

But you know it won’t.

1 Response to On Fruitvale Station, Oscar Grant, and Trayvon Martin