An Album I Love: The Dark Side of the Moon

Posted on September 2, 2013 by fromabrooklynbasement 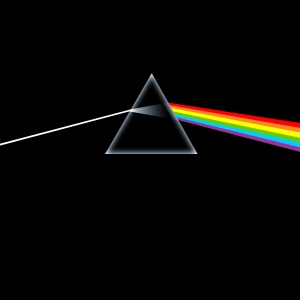 This one doesn’t need a whole lot of introduction. Dark Side of the Moon stayed on the charts for fifteen years, and is one of the best-selling albums of all time, along with Michael Jackson’s Thriller and the Eagles’ Greatest Hits (I know, I know, everybody hates the fucking Eagles). It’s also legendary for the strange synchronicity to be found when the album is played concurrently with The Wizard of Oz. The band denies this was intentional, but that hasn’t stopped pretty much everyone who has ever smoked a joint from trying to synch the two at some point. Hell, I did it last month, and I’m 32 years old. (Did someone post a synched version on YouTube? Of course! I love the internet.)

Anyway, the album is strange and wonderful and dark. As with many of Pink Floyd’s greatest albums, its central theme is the dissolution of a character’s mental state. This is in large part because Floyd’s original frontman, Syd Barrett, went crazy and left the band. (Wish You Were Here is explicitly about Barrett–legend has it that Syd would show up for recording sessions like he was still in the band; The Wall is less about Barrett and more about Roger Waters’ struggles with the pressures of stardom.) You put it on, and at first all you’re greeted with is silence. It takes around twenty seconds before you hear the gradually rising beat of a heart, which is soon surrounded by clinking cash registers and maniacal laughter, all of it giving way to the tidal wave rush of Breathe In the Air, a song that I’d describe as atmospheric, though that word alone doesn’t really do it justice. Breathe In the Air overtakes the atmosphere, filling your senses, the song becoming the only thing in the world. That may seem a grandiose description, but sit in a dark room and listen to that song on a really expensive stereo (getting stoned helps too), and I guarantee that’s how you’ll feel.

Of course, Dark Side is notable for its songs running together, making the album either one or two full songs (I think of it as two, with the break between The Great Gig in the Sky and Money where you’d flip the record–if you set the album to Wizard of Oz, this is the exact point where Dorothy walks out of black and white Kansas and in to the color of Oz). Breathe segues into the trippy On the Run, which sounds like being inside a crazy guy’s mind while it’s trying to outrun itself–ending in an inevitable crash. Then come the clanging alarm bells of Time, which also features David Gilmour playing one of the best guitar solos in rock ‘n’ roll history. (An aside; those alarms saved my life at least once: I was in a car between San Francisco and Santa Cruz, and was about to fall asleep at the wheel when Time started and snapped me awake. So, thanks Floyd.)

The great thing about Dark Side is that the songs all run together, but the transitions are unexpected. You never know which way they’re going to go. Time may slip seamlessly into The Great Gig in the Sky (maybe the best song title ever, by the way, the perfect name for a vision of the afterlife), but there’s nothing to prepare you for the operatic vocal of Clare Torry. It’s truly stunning. Side Two opens with the return of those clanging cash registers and Money, maybe the most distinctive bass riff in all of rock music, thanks in part to its unique 7/4 time signature. As a background voice says “I was really drunk at the time,” the music slows into the lovely Us and Them, a meditation on the meaninglessness of war and the fragility of life. Then comes the instrumental Any Colour You Like, and finally the album’s famed final two tracks, Brain Damage and Eclipse, both songs about the descent into madness, featuring the “lunatic … on the grass” (I’ve always wondered if this was a JFK grassy-knoll reference). I’ve written about songs that wait until the final line to resolve toward their titles before, but Pink Floyd very nearly works a whole album that way, waiting until Brain Damage to sing the line “I’ll see you on the dark side of the moon.” And the way Eclipse builds to a crescendo, “All that you touch, and all that you see…” with the final line, “And everything under the sun is in tune/And the sun is eclipsed by the moon ” just couldn’t be more awesome.

That’s Dark Side in a nutshell. What’s been missing from this recap is my personal connection to the album. Well, here goes. When I was a freshman in college, my drinking buddies and I used to sit around in one of our rooms in Anacapa and plow through 18 packs of MGD longnecks and handles of Bacardi rum and listen to the same three CDs over and over again: greatest hits albums from Hendrix and Zeppelin, and Dark Side of the Moon. I honestly couldn’t even guess how many times I’ve listened to this album. When those guys looked at my Desert Island Albums list, I think the album they were most surprised to see omitted was Dark Side. I left it off because, as great as it is, I haven’t actually sat down and listened to the whole thing in years (until I wrote this post). I sort of played it out.

But that doesn’t mean I don’t still love the album. It’ll always be one of my favorites, and every time I hear a song from it, I’ll be reminded of those times, those people–which is what all great music does.