Posted on October 11, 2013 by fromabrooklynbasement

Yesterday afternoon, a friend called to ask if I was going to watch Game 5 between the A’s and Tigers. I said no, because I knew the A’s were going to lose. She asked, “Why?”

Why? Because I was watching in 2000, when Terrence Long misplayed a flyball and Gil Heredia gave up six runs in the first inning and the upstart A’s lost to the long-in-the-tooth Yankees in Game 5.

Why? Because I was watching in 2001, when the A’s were up 2-0 on the Yanks, coming back to the Coliseum, and then Barry Zito threw one bad pitch to Jorge Posada and Jeremy Giambi’s fat ass didn’t slide when Derek Jeter made that fucking play that I’ve had to watch replayed a million times since then, and the A’s lost Game 3; and then Jermaine Dye broke his leg in gruesome fashion in Game 4; and the A’s went back to Yankee Stadium and Eric Chavez let a groundball go through his legs and the A’s lost in 5 again. 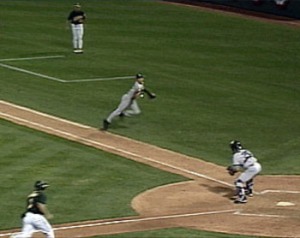 I would have embedded video, but I can’t bear to watch it

Why? Because I was watching in 2002 when Billy Koch gave up a ninth-inning home run to the least likable player in baseball, A.J. Pierzynski, and an A’s team that won 20 games in a row earlier in the season lost in Game 5 of the ALDS again, this time to the Minnesota Twins. I was so traumatized by this, I wrote a column for my college newspaper about it. (I can’t believe that’s online!)

Why? Because in 2003 I was watching when the A’s went up 2-0 on the Red Sox, a team I hate even more than the Yankees or Dodgers, only to have Byrnes and Tejada blow it on the basepaths in Game 3; only to have Keith Foulke keep pumping fastballs to David Ortiz, never throwing his best pitch, his changeup, until finally that fat, gap-toothed fuck blasted a game-winning double in Game 4; and I was sitting in the stands at the Coliseum when Manny Ramirez hit a home run and stood watching it for five minutes, when the A’s had the tying and winning runs on in the ninth, only Ken Macha stupidly pinch hit for Jermaine Dye, a former All-Star and the only guy who swung the bat well in that series, with his backup catcher, who struck out looking, and then Terrence Long also struck out looking, and that shitbag Derek Lowe showed up the A’s dugout as the Red Sox–and all the Masshole fans who infested the Coliseum that night–celebrated.

Why? Because I went to A’s-Tigers Game 5 last year and watched Justin Verlander shut out the A’s and silence what had been an insanely raucous crowd. 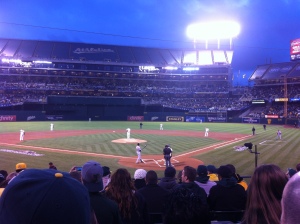 Where I was sitting for last year’s Game 5

Why? Because the A’s blew their shot to close out this series in Game 4 in Detroit on Tuesday, giving up not one but two leads and then failing to score when they had the bases loaded and nobody out in the eighth inning.

Why? Because you know who started last night for the Tigers: Verlander, who damn near threw a no-hitter and who is basically baseball’s version of a T-1000 Terminator (unless he’s facing Pablo Sandoval–Pandas eat Tigers).

Just put a number 35 Tigers jersey on him

Why? Because I knew how it would end. I’ve seen this movie before.