Posted on January 9, 2014 by fromabrooklynbasement

Before I get to my Divisional Round picks, let’s go back and look at my Wild Card picks, to give you some idea of if you should even bother reading this column.

On Saturday, I had the Colts 21-10. Right result, although by no means did I anticipate the insanity that was begotten in that game. In the night game, I had the Eagles, anticipating that the weather would be worse than it was in Philly, and not anticipating that the Saints would stuff the ball down the Eagles’ throats, led by Mark Ingram, a first-round draft bust up to this point who happened to put together the best game of his career in Pierre Thomas’ absence.

In the Sunday games, I forecast the Bengals would outlast the Chargers, as I figured that, for at least one round, they would be able to overcome having a ginger for a quarterback. I was wrong. You suck, Andy Dalton. BUT, in the late afternoon game, I not only correctly predicted that the Niners would escape from Lambeau victorious, but I got the final score of 23-20 EXACTLY RIGHT. If you’re wondering when I’m going to stop talking about that, the answer is NEVER IN A MILLION FUCKING YEARS!!! BOW DOWN BEFORE ME, ALL WHO WISH TO KNOW THE RESULTS OF THIS WEEKEND’S GAMES!!!

Ahem. I think I blacked out for a second there. Not sure what happened. I assume you’re still with me, so let’s make some picks.

Behold: the Peyton Manning choking in the playoffs face!

I don’t know much about football, but I know this: People who think Peyton Manning is the greatest quarterback of all time, who dare to even mention his name in the same breath as Joe Montana’s, are goddamn idiots. Manning is a longtime playoff choker. Need I point out his numerous shitty performances in wintertime Foxboro? How about the Super Bowl-clinching pick-six he threw to Tracy Porter to give the Saints a championship in 2010? Or his awful overtime interception against the Ravens last year? Manning is a great regular season player, but once the calendar turns to January, his specialty becomes throwing back-breaking interceptions. Even in the one Super Bowl he won, the MVP should have been the abominable Rex Grossman, who singlehandedly destroyed the Bears’ hopes of a victory. Now look at the QB going up against Manning this weekend.

Philip Rivers, you are a golden god

Look at that ridiculous gold and mother-of-pearl bolo tie. Philip Rivers looks like an oil tycoon. He looks like an unrepentant asshole. He looks like he doesn’t give a shit what you think about him. In other words, he looks like the kind of quarterback who can go into a hostile environment and wrangle a victory. He looks like the guy who’s taking his turn sending Manning home early this year. You heard it here first: Chargers 31, Broncos, 28.

The Colts authored a miraculous comeback against the Chiefs last week, but can they repeat the performance? Against the Chiefs they were at home and going up against the quarterback/coach combo of Alex Smith (who, to be fair, was phenomenal in that game) and Andy Reid (who was considerably less so). On top of all that, they benefited from nearly every key Chiefs defensive player, plus their star running back, getting hurt during the game. Andrew Luck is a badass, and deserves full credit for his performance, but this week they’re on the road, going up against Tom Brady and Bill Belichick. You’re telling me Belichick won’t have something up his sleeve for the young quarterback? And after Alex Smith led a Jamaal Charles-less Chiefs team to 44 points, what is Brady going to do against a Colts defense that, other than stud defensive end Robert Mathis, is awful? With this game being played on Saturday night, giving that crowd of New England Massholes all day to get shitfaced.

Remember after the Marathon bombing, when we had to pretend that we liked people from Boston. That sentence is over. I hate these fucking people so much

I’m picturing a rowdy environment and a game that gets out of hand quickly. Patriots 41, Colts 24. And I’d be predicting more points for the Pats if this game weren’t being played outdoors in Boston.

These teams played a few weeks back on Monday night, with the Seadderall PEDhawks laying waste to the Saints at their echo chamber of a stadium by a score of 34-7. Did New Orleans learn enough from that first matchup to take down the top-seeded Seabitches? They ran the ball exceedingly well at Philadelphia last weekend, and they’ll need to do it again if they want to keep Seattle’s pass rushers at bay and prevent their ball-hawking DBs from picking off Drew Brees, who, for all his virtues, has a tendency to get careless with the ball. 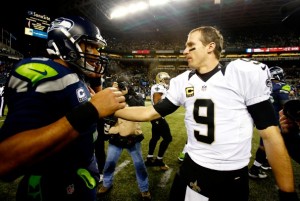 Can Brees get revenge against Wilson this week?

On the Seattle side, can they rediscover their offensive mojo, which seemed to go AWOL in the last few weeks of the season—especially the passing game, as Russell Wilson has a paucity of wide receivers similar to what Colin Kaepernick was dealing with earlier this year. And has Seattle’s long-cultivated air of invincibility at home been damaged by their Week 16 home loss to Arizona?

My take: This won’t be the blowout that their previous Monday Night game was, but Seattle will be able to move the ball on an overrated Saints defense, the home crowd will make an impact, and Brees will commit a couple of turnovers, including a late pick-six that will seal the game. Seabitches 29, Saints 17. 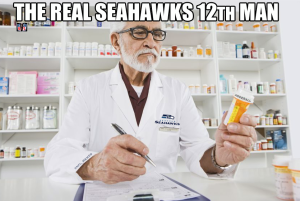 I know that, as a San Francisco Giants fan, I am perhaps being a tad hypocritical with the PED jokes. To this I say, “Suck it, Seabitches.”

First a little musical interlude that has nothing to do with this game.

Man, I love that song. If you happen to also like it, you should read my post, written way back in the salad days of this blog, about the fantastic album on which it appears.

Anyway, enough with the shameless self-promotion and back to the game, which is gonna be a really good one. Coming off their dramatic win over the Packers, the red-hot Niners, winners of seven in a row, come in to Carolina looking to avenge a Week 10 loss that was a 10-9 rock fight. These teams are mirror images of each other. Both feature young, athletic quarterbacks, physical offensive lines, coaching staffs that like to establish the running game, and dominant defenses headlined by All-Pro middle linebackers (Luke Kuechly on the Carolina side, Patrick Willis and NaVorro Bowman on the Niners side).

Will Carolina be rested and ready for a Niners team that played a tough game in brutal conditions in Green Bay last week? Or will the Panthers be rusty coming off the bye week? Will the early East Coast start time (the kickoff is effectively at 10 a.m. for the Niners) have an impact? (This is a common pitfall for West Coast teams that the Niners have avoided during Jim Harbaugh’s tenure.)

In short, this game could be decided by anything—a missed field goal, a bad penalty, an ill-timed turnover. Hell, look at the Panthers’ victory back in early November: If Vance McDonald catches a third-quarter Kaepernick pass on a deep seam route, the Niners probably end up winning. And that’s the biggest reason I’m feeling confident about this week’s game: In that loss, the Niners didn’t have Vernon Davis (who left in the first quarter with a concussion) or Michael Crabtree (who hadn’t yet returned from his torn Achilles). Now, San Francisco’s offense, which back in Week 10 was so dysfunctional it had the entire Bay Area freaking out, has all its downfield weapons healthy, and the Niners are moving the ball the best they have all season. This game will be close, but I believe that having VD and Crabs at the same time (ewww) will make the difference. The score? Well, as a sports fan I’m nothing if not superstitious, and since I hit the nail on the head last week, I’m going right back to the well: Niners 23, Panthers 20. The NFC Championship Game has to come down to Niners-Seabitches. It just has to.

This entry was posted in football, Sports and tagged football, NFL Playoffs. Bookmark the permalink.

2 Responses to 2014 Divisional Round Playoff Picks