Posted on October 14, 2014 by fromabrooklynbasement

You know how newspapers write obituaries for famous people and keep them on file, waiting for the celebrities to die? Well, I knew this day was going to come, but I didn’t do that. I couldn’t bring myself to write this until I absolutely had to.

I was watching the Niners game at a crowded bar last night. At halftime, I noticed I had a voicemail from my mom. I went outside to check it and the message was short, simply Mom saying, in a somber tone, “you need to give me a call.” I knew right away. 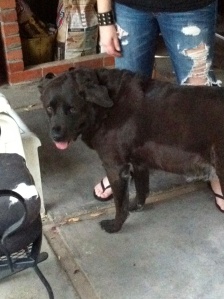 Sasha came into my life because my sister took a road trip. In 2004, she drove up to Oregon in her beater Mazda pickup truck. She stopped at a cafe in Rogue River, and happened to see an ad in a paper that someone was giving a dog away. She drove out to this little farm, where she met Sasha, a black lab-rottweiler mutt with an instantly charming personality. In the truck she went, back to the Bay Area.

It turned out that Sasha had heartworm; the people on the farm most likely gave her away because they couldn’t afford to treat it. My mom paid the bills.

Everyone says that their dog is the best dog ever. But Sasha really was. Everyone who ever met her was totally enchanted. She was a monster, almost a hundred pounds, who would crawl in your lap like she was a chihuahua.

I used to sleep on the couch when I was sick. Sasha would always come and lie on the ground right next to the couch. Just to be close.

She would lie in that same spot next to the couch under my dad’s legs when he would watch TV, his feet propped up on the coffee table. He stepped on her all the time. It drove him crazy. But he always let her lie there.

My sister and I used to joke that Sasha thought Ariel’s name was “Food” and my name was “Walk.” When we lived together, Sasha would wait by the front door for me to come home, knowing I would take her out right when I got back. Those were hard times for me, but no matter how depressed I was, I could count on watching Sasha frolic through the East Bay hills to lift my spirits. I’ve never seen any other creature show so much joy doing anything. It was infectious.

She liked chasing squirrels. She caught them sometimes. That was a mess.

She had a thunderous bark, but most of the time she talked to us in a patter of vocal roo roos. I remember when the family took a two week trip to Spain, and when we came back she exploded in a burst of those noises that communicated her message better than any human speech ever could: Don’t ever leave me again.

That’s a member of the family

So why does she get to leave us now?

We never knew exactly how old Sasha was, but she had six years worth of registration tags on the collar she came with, so I always figured she was six back then. So she made it to sixteen. I’ve never known another dog that size who lived that long.

Sasha reminded me of Lara, in that they were both incredibly stubborn and full of life. When an ICU doctor told us Lara wasn’t going to make it through the night, she survived another month. A year ago, Sasha had a stroke, and the vet told us she might not walk again. We wondered if we should put her down. And then, in the vet’s office, she stood up and started walking around. The vet was flabbergasted. She lived for another year.

There are maybe five people in my life I loved as much as I loved that dog. A couple of them are dead now, too.

I have a “Grief” category on this blog. How fucked up is that?

I was back home for a visit just last week. I took Sasha for a couple of short walks, just around the block by my mom’s house. She let out a roo roo when she saw me go for the leash. She couldn’t go far, but she still had a bounce in her step, at least for the first couple of minutes outside. When I said good bye to her on Sunday night, right before I took the red eye back to New York, I knelt down on the floor and put my forehead on hers and told her I loved her. I wish I’d laid down and given her a big hug—like on the Christmas Eve a few years ago when I came home hammered and passed out next to her on the dog bed—but I just didn’t want to believe it was the last time I’d see her. The holidays were just a couple of months away. She made it sixteen years. What were two more months?

I usually edit these things before I post them. Not this one. I think a chaotic, incoherent remembrance of someone you love is fine, because doesn’t that sum up this fucked up, nonsensical existence of ours? There’s no narrative that I can see, except one day you’re here, the next day you’re not.

Also, I really don’t want to read over this again.

RIP, Sasha. There will never be another dog like you. I love you more than these silly words could ever say.

This entry was posted in Grief and tagged dogs, life with dogs. Bookmark the permalink.