What You Missed While I Missed You

Posted on December 31, 2014 by fromabrooklynbasement

It’s been five years since I last saw you on your birthday. You were turning thirty. We’d broken up a few weeks before, but it was a big milestone, and I wanted to celebrate it with you, at least in a small way, so we met for breakfast at a diner in Danville. It was sad sitting at that table with you, not being a part of your life in the same way that I had been for so long, but it was nice to be with you, if only for an hour, on a day that so many people, including the doctors who diagnosed you with CF as a baby, said you wouldn’t see. Of course, when I said that to you on that morning, you replied, “I always thought I would make it this far.”

Today would have been your thirty-fifth birthday. You didn’t make it this far.

In the half decade since our last birthday brunch, I’ve seen a lot of lows. There was my failed first attempt at living in New York, the still-unpublished status of my novel, the succession of jobs that ate away at my soul and kept me broke at the same time … and all of that paled next to May 6, 2011, the day we lost you.

But that’s not what I’m writing to tell you about. You always hated it when I got down on myself or depressed, and today I don’t want to let the hard times rule my mind.

Instead, I’m writing because I want to tell you about how my life has somehow, miraculously, gotten better.

It started in August of last year, when I got my current job, as the managing editor of a couple of magazines. The job isn’t perfect—every day I wonder how I became a managing editor—but it’s the best one I’ve ever had. It enabled me to stay in New York, and this year it gave me the opportunity to write stories that thousands of people have read—including a couple of big travel features and a cover interview with Robert De Niro. (I can imagine you saying “You talkin’ to me?” as I type that.) I can’t fucking believe I’m saying this, but I actually have a career now.

If that’s not crazy enough, check this out: I’m kind of sort of a musician now. I play guitar at Sunny’s Bar on most Saturday nights, and I’ve mostly been accepted by the amazing players at the jam there. The people in the audience seem to like the songs that I do—I’ve had more than one person call me “talented,” which is not a compliment I am at all capable of wrapping my head around. I’m pretty sure you would not have believed any of this would come to pass back when Anton took us to Sunny’s back in 2009.

And it gets better! I play in a rock band with three really cool dudes here in Brooklyn. I get along with the guys really well, and we play gigs in Brooklyn and Manhattan. We’ve even gotten paid for a couple of them. I think that makes me a professional musician! In New York City! Here’s a clip from one of our shows (it’s pretty grungy, but I think you would have liked it):

You definitely wouldn’t have believed I’d be doing all this when you got stuck listening to me learn guitar ten years ago. I still don’t really believe it myself.

I also got to do some pretty cool traveling this year: trips to Chile (I finally made it to South America!), New Orleans, Las Vegas, Portland, and of course San Francisco for Hardly Strictly Bluegrass (you know how it’s my favorite weekend of the year in SF). 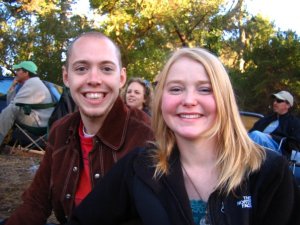 From the first time we went to HSBG, in 2007. I still have that jacket, and the Allman Bros T-shirt.

Speaking of San Francisco, I got to watch the Giants win the World Series for the third time in five years. I know dealing with me when I get stupid drunk was about your least favorite pastime, but I think you would have enjoyed the extreme level of silly, drunken joy I experienced after Game Seven of the World Series.

It hasn’t all been perfect, of course. Sasha died a couple of months ago, and you know how much I loved her. But I like to think that wherever you are, she walked up to you just now and laid her head in your lap.

I haven’t done a ton of writing this year—outside of work, anyway—which is a bit of a disappointment. But I did get an essay that I wrote a couple of years ago published in a book that came out earlier this month. It’s the first piece of mine that’s in a real book. 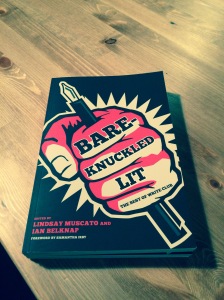 The essay was about me, but it was also, in part, about you. Almost everything I write is at least a little bit about you.

It’s a little awkward to say this to you, but I’ve dated a few girls this year. I haven’t exactly settled down yet, but for the first time since we broke up, there’s a part of me that believes I’ll meet someone I could be be happy with, that I didn’t cost myself my only shot at that by fucking things up with you. I think you’d be happy to hear me say that. It would have been hard for me to see you go out with someone else, but eventually I would have wanted you to find someone. It makes me sad that I never got the chance to face that test.

Maybe the biggest thing for me is that I still live in New York—which you know is where I always wanted to be—and for the first time I don’t feel the restless urge to pick up and move somewhere else. I have friends, family, a job, a band … I actually feel at home here.

It’s crazy to say, but, all things considered, 2014 has been the best year of my life. And I’m even (cautiously) optimistic that things will keep getting better in 2015. Me, optimistic—can you believe that?

There’s one more thing I want to tell you. Yesterday I was on the 101 headed down to LA, and I stopped in Santa Barbara. Of course, I went to Sands Beach, to dip my feet in the ocean where we scattered your ashes and to spend a little time thinking about you. As I was driving into IV, I put some Tom Petty on the radio for you, but for some reason my iPod was acting up, and instead of the song that I meant to listen to, when I pulled up to the end of DP to park the car, it was “Time to Move On” that was playing.

I hummed the tune as I walked along the cliff, but I didn’t even realize the symbolism until my feet touched the water. You know I don’t believe in this sort of coincidence meaning anything—it really wasn’t you that was messing with my iPod, was it?—but I was struck by the moment all the same. Because in a way, it is time to move on.

That doesn’t mean I don’t still miss you, or that you won’t always be in my heart. It doesn’t mean I’m not sad today. I wish I could sit down with you today, have some pancakes, and talk face to face. Because no matter how good things are, they’d be so much better if you were here. But as much as it still hurts that you’re gone, I’ve stopped feeling guilty that I’m here and you’re not. I’ve stopped letting what happened between us, and your death, keep me from trying to be happy. And I think you’d be glad to hear me say that.

This entry was posted in Grief. Bookmark the permalink.