Posted on January 8, 2015 by fromabrooklynbasement

Well, last week’s picks could have been better. Thanks to the incompetence of a few key people, I nailed Carolina (thank you, Ryan Lindley!), Indy (thank you, Andy Dalton!), and Dallas (thank you, NFL referees!)—but I missed on Baltimore. And while I missed the Indy-Cincy score by just two Colts points, most of my other calls weren’t particularly close. Why is that? Because I don’t know dick about football! So why are you even reading this? I don’t know! Let’s make some more picks!

If I was a Patriots fan, I would be terrified of this game. Baltimore has played three playoff games in New England in the last decade; the Ravens won two of those games, and only l0st the third after a dropped pass in the end zone and a missed chip shot field goal. All of the Ravens’ key guys have playoff experience, and they have a Harbaugh for a coach. 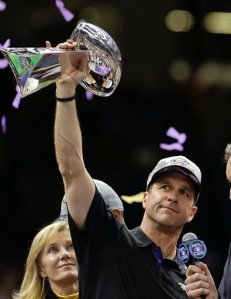 More than that, while you’d think that the Pats would be able to expose Baltimore’s wretched secondary, if Elvis Dumervil and Terrell Suggs can approximate what they did against Pittsburgh, Tom Brady won’t have time to get the ball out. Plus, if there’s one thing the NFL deserves karmically after this cynical, depressing season, it’s for Ray Rice’s team to go on a deep playoff run and force Roger Goodell to have to stand in front of reporters and answer more Ray Rice questions. I will probably regret this pick on Monday, but you know there’s always an upset in the Divisional Round, and I’m taking B-More. Ravens 26, Patriots 24.

Peyton Manning is and forever will be a playoff choker. Let’s just bask in this play, one that I watched from a bar on Bourbon Street in New Orleans and that turned into one of the funnest moments of my whole life:

A team that went under .500 this year is going into Seattle to play the hottest team in the league, a team that’s basically invincible at home. I’m not sure what I’ll be doing Saturday night, but I’m sure I won’t be watching this game. Seabitches 30, Panthers 6. 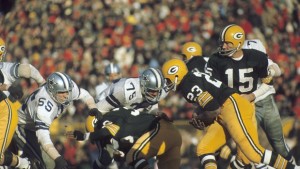 This one’s gonna be fun. An Ice Bowl rematch? Two of the most obnoxious teams/fanbases in all of sports? Aaron Rodgers (who Grantland compared to Joe Montana this week in an article that made me want to kill myself about 75 different times) going up against Dallas’s horrendous defense? Tony Romo’s continued quest for redemption that is destined to end in a backbreaking fourth quarter pick-six? 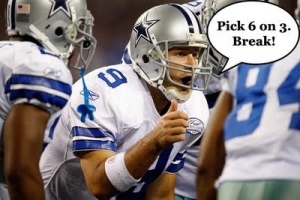 God bless whoever made this

Yeah, that really is destiny. Packers 38, Cowboys 24, with the final margin coming on said Romo pick-six.

The sadness of Cowboys fans is the only thing that can bring me joy in these playoffs.

This entry was posted in football, Sports and tagged football, NFL Playoffs. Bookmark the permalink.