Posted on May 31, 2013 by fromabrooklynbasement

In Moneyball, Oakland A’s GM Billy Beane explained to writer Michael Lewis that he breaks a season into thirds when he’s constructing his team. The first third is for figuring out what you have; the second third, leading up the the trade deadline, is for improving what you have; and the final third is letting what you have gel and hopefully making a playoff run.

I’m gonna go out on a limb and say that a guy who became so successful and famous as a baseball GM that Brad Pitt played him in a movie has a pretty good handle on how to evaluate a baseball team. 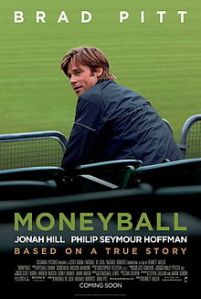 This actor plays a guy who knows a lot about baseball

So, with most teams hitting the end of the season’s first trimester this week, I thought I’d take stock of the Bay Area’s teams so far and their prospects for the rest of the season. First up, the Giants.

The Good: The Lineup and Bullpen

Most casual fans think of the Giants as a team built around pitching, in particular a dominant starting rotation. This was certainly true in 2010, when the Giants rode Tim Lincecum and Matt Cain (along with some suprising and somewhat flukey contributions from a misfit cast of veteran hitters) to the team’s first championship in San Francisco. But it actually wasn’t as true in 2012. On the surface, the Giants offensive numbers weren’t impressive last year, but that was largely because Phone Booth Ballpark was historically oppressive, particularly of home runs. As a few of the more intelligent baseball analysts out there have pointed out, the Giants led the National League in runs scored on the road last year. And their playoff run was largely built on bashing opposing pitching and outstanding work from the bullpen (along with a few clutch starts from Ryan Vogelsong and Barry Zito).

This season has seen a reprise of the 2012 formula. The Giants are fourth in the NL in runs scored, trailing the best team in the league so far (St. Louis) and two teams that play in notorious bandboxes (Colorado and Cincinnati). Buster Posey has been as outstanding as expected (.294/.382/.492), if not quite as incandescent as he was during his MVP season. Pablo Sandoval has stayed on the field so far, and has put up Kung Fu Panda numbers (.288/.328/.434), and Hunter Pence has provided googly eyes and enough power to offset his low on-base percentage (.290/.335/.505). Brandon Belt started the season in a horrible slump, but has righted the ship to at least passable numbers (.250/.324/.427) that should continue to improve, as well as a number of clutch late-inning hits. And the middle infield has traded hot months, with Brandon Crawford (a probably unsustainable but God it’d be awesome if he really is this good .283/.349/.449) posting a scalding April and folk hero Marco Scutaro (.330/.381/.430) tearing it up in May. Angel Pagan has mostly sucked so far (.262/.314/.374), except for that time he hit a walk-off inside the park home run [link], but on the whole, especially considering that they play half their games in an extreme pitchers’ park, the Giants have had one of the best lineups in baseball so far this season. 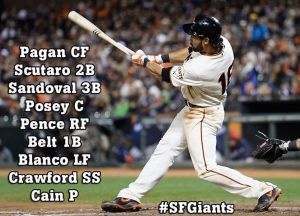 What’s more, the bullpen has once again been a strength. Sergio Romo, my current favorite player in all of baseball, has been stellar as the closer (8.00 K/BB, 2.47 FIP), and Jeremy Affeldt, Santiago Casilla, Jose Mijares, Javier Lopez, and Jean Machi ALL have ERAs below 3.00 (obviously, the sample sizes are very small for relievers this early in the season, but the uniform low ERAs indicate that the relief corps as a whole is keeping opposing lineups on lock down). 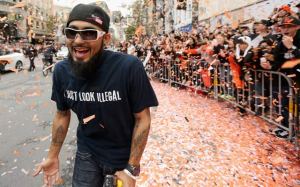 I love this guy

The Bad: The Rotation

Start with the silver lining: Madison Bumgarner has been stellar (72 IP, 3.14 K/BB, 3.13 ERA, 3.41 FIP), and has solidified his claim as the top young lefthanded starter in the game. Assuming he doesn’t fall apart in the next month, he should make his first All Star Game this year.

Barry Zito has been exactly what he’s been for years: a guy with poor velocity and shaky command who dominates in the starts when he can locate his pitches and snap off a sharp curveball, and walks a ton of guys and gets shelled in the starts when he can’t. His numbers are pretty close to what he’s put up his last couple of seasons (5.6 K/9, 3.3 BB/9, 3.88 ERA, 3.85 FIP), and while he’ll never be the ace his contract would make you hope for, he’s a perfectly acceptable back of the rotation starter.

The rest of it is, um, not so good. The team, which again plays in one of the most pitcher-friendly parks in baseball, has given up the second most runs in the NL. Matt Cain has gotten shelled so far (5.00 ERA, 4.91 FIP), and while his last couple of starts have been better, the team really needs him to pick up the slack, because Ryan Vogelsong got hurt in the first decent start he was having all year, and the Giants are going to be patching together that fifth starter slot for the next couple of months (and possibly the rest of the season, depending what Vogelsong, who had been mostly horrible before the injury, can give them when he comes back). 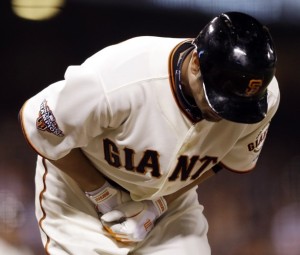 Not something you ever want to see

And then there’s Tim Lincecum, who fans hoped would bounce back and at least resemble his 2011 self after a disastrous 2012 season. Not quite. Timmy hasn’t been as bad as he was last year, but he’s basically the same pitcher he was last year, a guy who both strikes out and walks tons of hitters (9.42 K/9, 4.29 BB/9) because his pitches move a ton, but he doesn’t really know where they’re going. He’ll have starts where he puts up zero after zero, and then he’ll have starts where he has that crooked inning that blows everything up, and you never really know which is which. This is who Timmy is now–less the Cy Young contender of his early career, more an approximation of Jonathan Sanchez back before he completely imploded. Like Zito, he’s not a terrible guy to have, if you have proper expectations, but the Giants appear to have dodged a major bullet when Lincecum turned down that $100 million extension last year. And it may be time, given how Lincecum has continued to struggle as a starter and how dominant he was as a reliever in last year’s playoffs, for him to seriously consider pulling a Dennis Eckersley and switching to relief.

Where can they improve?

The improvement is going to have to come from the starting rotation. How likely is that? Well, I think we can safely expect Cain to rebound in the second half. But with Lincecum and Vogelsong now both question marks, the Giants pretty clearly could stand to add a starter. They called Mike Kickham up from AAA to replace Vogelsong, but he was knocked out of his first start early, and it’s tough to know what he’ll give the team moving forward. There’s not a lot of high end pitching in the minors either, with Zach Wheeler preparing to become an ace for the Mets thanks to the 2011 Carlos Beltran trade (which I’m not criticizing–just saying, that’s the risk you take when you trade a young pitcher). So the team will have to decide if it wants to try to acquire a starter at the deadline, or if they can afford to hang on and wait for Vogelsong.

The Giants, at 29-25 are in second place, 1.5 games back of first, on pace for 87 wins. Their run differential is at -2, so they’ve actually overachieved a bit. They’re probably going to have to win the division to make the playoffs, as Wild Card competition will be stiff, with St. Louis, Cincinnati, and Atlanta all looking like certain playoff teams, with Pittsburgh thirteen games over .500, and with me refusing to believe that Washington won’t go on a major run at some point. Fortunately, the West should be winnable. The Padres suck and the Dodgers are in (hold on … wait for it …) last place (HAHAHAHAHAHAHA!!!!). I don’t believe in the Rockies. It should be no surprise that Arizona is good again–I hated the Upton trade and predicted he would be an MVP candidate, but the Snakes underachieved last year after winning the division in 2011, and they’re the team I expect the Giants to battle in the second half.

This entry was posted in Baseball, Sports and tagged Baseball, san francisco giants. Bookmark the permalink.