Posted on June 3, 2013 by fromabrooklynbasement

We see the Fab Four from below, photographed at an off angle that gives them a floating, dreamy kind of appearance, which is accentuated by the flowing script of the album title. The text is reminiscent of the font you’d see on a Bill Graham Productions concert poster from the mid-sixties. The cover image was a calculated attempt to take advantage of the booms in both folk music and psychedelic rock that were happening at the time. (The album, which you can listen to in full here, came out in December 1965, and it features a number of acoustic songs and was marketed as the Beatles’ “folk album.”) The psychedelia is also evident in the music: This is the first Beatles album in which you can clearly hear the influence of drugs in the songwriting (I’ve always thought of Rubber Soul as the Beatles on weed, Revolver as the Beatles on acid, and Sgt. Pepper’s Lonely Hearts Club Band as the Beatles on a fistful of everything the guy at the Chelsea Drugstore had in stock). Also, for the record, I have a jacket that looks almost exactly like the one John is wearing.

The electric guitar intro to Drive My Car, a sort of brash, upbeat, jumping start to the album.

A sliding electric guitar riff that fades out as John sings “nah nah nah,” at the end of Run For Your Life. Sonically, it’s similar to the guitar intro of Drive My Car, providing a nice bookend to the album.

The album opener, Drive My Car has all the classic Beatles elements: a rock ‘n’ roll electric guitar, vocal harmonies, witty, subtle songwriting (let’s be clear: The song is addressed to a Beatlemania-era groupie, and when John sings, “Baby you can drive my car,” he is not talking about an automobile)

The next track is the classic Norwegian Wood, a waltz that features the first instance of George Harrison playing sitar (which he learned from the legendary Ravi Shankar) on a Beatles recording. The song tells a tale of a man who goes out with a woman and goes back to her place and at the end of the date she goes to bed leaving him to sleep in the bath. My favorite part is the various interpretations of the final set of lyrics (“And when I awoke, I was alone, this bird has flown/So I lit a fire, isn’t it good, Norwegian wood”): Some people interpret the fire as a reference to lighting a joint, which goes with my conception of Rubber Soul as the “Beatles on weed” album. But my favorite case of clashing interpretations come from my freshman year of college: I was having a conversation with my roommate and my dad, who was visiting, and my roommate said, “I like this song because the girl stands him up, so John burns her house down.” My dad looked at my roommate and said, “What are you talking about? He’s looking contemplatively into the fireplace. Are you some kind of psycho?”

The next track is Paul’s You Won’t See Me, a wistful, sonically multi-layered breakup song, which leads into a true masterpiece, arguably the Beatles’ most underrated song (if it’s possible for a Beatles song to be underrated), Nowhere Man. The song opens a cappella, then picks up with guitars and sad lyrics about a directionless man who’s totally lost his way in life. John, who went through periods of depression, wrote it about himself in a moment of introspection.

George Harrison wrote the next song, Think For Yourself, a fuzzy-guitar’ed intro with fairly typical sixties lyrics about not trusting authority figures. Next comes the harmony-filled The Word, a song about, naturally, the importance of love.

Side A of the record ends with the classic Michelle, Paul’s serenade to a French-speaking girl, full of words that go together well. Michelle won the Grammy Award for Song of the Year, and has aged so well that Paul played it for the First Lady at the White House. It was also the first song I ever learned to play for a girl on guitar, which worked out so well that I didn’t play it again for ten years.

Side B opens with What Goes On, sung by Ringo, which means I’m going to move on and talk about the next song, Girl, a slinky song which John has alternately claimed is a portrayal of an idealized girl or a slagging of Christianity. I see it simply as a classic song of a girl you can’t help but kill yourself for, even though you know she’s going to laugh it off–sort of like a PG version of Led Zeppelin’s Heartbreaker.

Next is the jangly acoustic intro of I’m Looking Through You, a Paul-written breakup number (it ends “Oh, I’m looking through you/Baby you changed”) that transitions from acoustic to electric on the break. It’s long been a favorite of mine, and is another song from the Beatles catalog that is sometimes overlooked.

Following I’m Looking Through You we have the album’s most famous track, In My Life. John’s tale of old friends and lovers fading from consciousness in the wake of a new love is one of the Beatles’ signature songs, and Rolling Stone ranked it #23 on its 500 Greatest Songs of All Time list. I’d go on, but I’ve already written extensively about my personal relationship with the song.

Next is the jangly Wait, redolent with percussive guitar chords and background whistles that somehow evoke the noises of traffic for me (I mean this in a good way, even if it doesn’t sound like it). The high ringing guitar intro of If I Needed Someone follows. It’s a song that with the twangy guitar and the echoing vocal harmony, is perfectly evocative of its time.

The album ends with Run For Your Life, a Beatles version of a murder ballad. John claimed this was his least favorite Beatles song, but what does he know? I’ve always liked it, though maybe that’s just because I recall listening to it a bunch after a bitter falling out with a girl years ago.

Because it’s the most famous track on the album, and my personal favorite, it couldn’t be anything but In My Life.

The chorus of In My Life, one of the most touching lyrical compositions in pop music:

“Though I know I’ll never lose affection
For people and things that went before
I know I’ll often stop and think about them
In my life I love you more.”

One of the tricky things about a Desert Island Albums list is limiting yourself to a single album per band. It’d be pretty easy to just say, “I’ll take all the Beatles albums to my island,” and call it a day. Plus, everyone has a different Beatles album that he or she prefers. My dad’s is Revolver; my freshman year roommate’s is Abbey Road; back in college, mine was Sgt. Pepper; I even once got a photo editor friend to photoshop me onto the album cover. 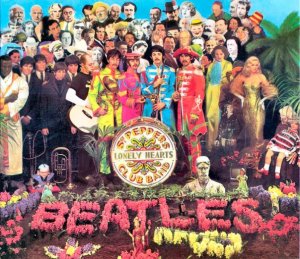 Can you see me?

But as I’ve gotten a little older, the acoustic sound of this album (notice how many times I used the word “jangly” in this write-up) is the one that’s stayed with me the most. And more than anything else, if I’m going to be stranded on a desert island for the rest of my life, I’m going to have to be able to listen to In My Life. That’s non-negotiable.

This entry was posted in Desert Island Albums, Music and tagged music, The Beatles. Bookmark the permalink.