Posted on September 17, 2013 by fromabrooklynbasement

Lightning struck the Niners in Seattle

That wasn’t as much fun as last week. Let’s get this over with.

The Jerry Rice Award (Most Dominant Player on the Field): Richard Sherman

Really, this award goes to the whole Seahawks defense. Fuck, man, they pounded the Niners’ offense. But the biggest problem was that the Niners’ receivers just couldn’t get open downfield. There were a lot of plays where the offensive line gave Colin Kaepernick plenty of time to throw, and he ended up scrambling around and throwing the ball away because nobody got open. And Seattle was missing one of their starting corners, Brandon Browner. This was the exact scenario we feared before the season started, and the thing that worries me most about future Niners-Seahawks matchups. Anquan Boldin destroyed the Packers last week, but Richard Sherman held him to one catch this week.

I’m starting to thoroughly despise this Seattle team, but I just can’t hate a guy who’s from Oakland, played at Cal, and has an awesome nickname, “Beast Mode,” that he wears in a blinged-out grill. But it’d be nice if he stopped scoring touchdowns against the Niners. 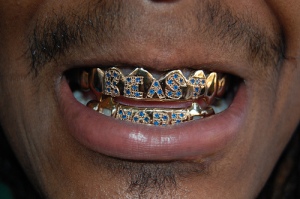 Did you think I was kidding about the grill?

He talked shit before the game. Then he shut down Anquan Boldin, intercepted a pass, and totally stuck Kyle Williams to shut down what looked like a play that was going to go for a huge gain. And then he talked shit after the game. Dammit.

My friend Tierney is probably the most insane Niners fan I know. We watched the game at the back bar at Finnerty’s, and when the Niners blocked a punt in the first quarter, Tierney got so fired up she literally broke off a section of the bar, sending drinks scattering everywhere. I only wish she could have bashed in Pete Carroll’s smug face with that piece of the bar.

The Ronnie Lott Award (Guy Who Is Such a Badass He’d Cut His Own Finger Off To Make a Play): Patrick Willis

Nobody on the Niners really did anything worthwhile, so this one will be a bit of a digression. One of my favorite games to play is figuring out what a pro athlete would have done in life if he hadn’t been a pro athlete. On Sunday, while looking at Patrick Willis, who I’m pretty sure is the biggest badass in all of sports, it occurred to me that if he hadn’t played football, he absolutely would have been a member of SEAL Team 6. I’m pretty sure he would have been the guy  who put a bullet in bin Laden. Seriously, just watch this clip, and swap Obama in for Kenny Powers, and I think you’d have exactly how that strike would have gone down.

The Adam Walker Award (Player Whose Actions Most Led to Defeat): Justin Goldman

The Niners were thoroughly outplayed. Kaepernick had the worst start of his career. And I blame myself. I’ve been on the Kaepernick bandwagon from his very first start, even when a lot of people thought the Niners should have gone back to Alex Smith. Hell, I drive the Kaepernick bandwagon. During that first start against the Bears last year, I said during the first quarter that I was going to buy a Kaepernick jersey. But I hadn’t actually bought a jersey–until Sunday, a couple hours before the game, when I ordered one. So, I jinxed everything. My bad.

Overall Rating For This Game (On a scale of Zero to Twelve Anchors, in honor of San Francisco’s favorite beverage): 2 Anchors

Remember when you were like 15 years old, and somebody bought you a six pack of beer for the first time, and you drank like two beers and then puked all over yourself? That’s basically what the Niners did on Sunday.