Posted on October 29, 2013 by fromabrooklynbasement

The Niners flew to London last weekend to play the worst team in the league, the Jacksonville Jaguars. It turned out they were actually playing the worst team I’ve ever seen. The Niners were giving the Jags 17 points, and they had that spread beat early in the second quarter. It was 28-3 at halftime, and San Francisco’s starters got to take the fourth quarter off. Good times for all–except for the Jags, who will probably be playing in London full time five years from now. This is going to be a short writeup because, honestly, this game wasn’t that interesting.

The Jerry Rice Award (Most Dominant Player on the Field): Colin Kaepernick

It came out last week that Kaepernick had been fighting a foot injury for a few weeks. Mercury News columnist Tim Kawakami theorized that the injury (about which the Niners never released any details) was the reason for Kaepernick’s struggles from weeks two to six. That’s mostly conjecture, but the Kaepernick we’ve seen the last couple of weeks looks a lot more like the guy we were expecting this season. Against the Jags, Kaep scrambled all over the place, running for 54 yards and two TDs, and completing 10 of 16 passes for 164 yards and another score, and generally looking like the Randall Cunningham clone that Niners fans got used to watching last year.

One of Kaepernick’s first-half TDs

I love Frank Gore as much as anybody, and he had another solid outing, with 71 yards and two TDs. But it bears mentioning that, with the starters sitting in the fourth quarter, Kendall Hunter got a bit of PT, and racked up 84 yards on just nine carries. I wouldn’t mind seeing him get a little more run in the coming weeks.

The Adam Walker Award (Player Whose Actions Most Led to Defeat): Kyle Williams

I know it’s a bit absurd to give this award in a game the Niners had locked up halfway through the second quarter, but this needs to be said: When I started this column, I was going to name this the “Kyle Williams Award,” in honor of the guy whose two fumbled punt returns cost the Niners a Super Bowl berth in 2011. I decided not to, because it seemed fucked up to have this award named after a guy who’s still on the team, and so I named it after Adam Walker, the other kick returner whose fumbles destroyed a Niners playoff run (as well as my attorney’s childhood). But today Williams fumbled the opening kickoff and then later muffed a punt. The Niners got the ball back both times, and this game was a blowout anyway, so it didn’t matter today. But Kyle Williams can’t be returning kicks anymore. It might kill me–literally, I might actually fucking die–if I see this sight in a playoff game again this year. 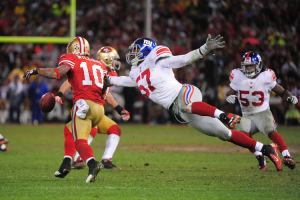 Overall Rating For This Game (On a scale of Zero to Twelve Anchors, in honor of San Francisco’s favorite beverage): 4 Anchors

The Niners took care of business on Sunday, and they go into their bye week 6-2, a game behind the Seattle Seagulls. (Who somehow escaped with another narrow road victory on Monday night. I hate that fucking team. They should be 4-4 right now.) You know who’s looking forward to the week off the most? My liver. It’ll be nice to have a Sunday afternoon where I don’t get obliterated for once. After the bye, things get interesting, as the Niners host a resurgent Carolina Panthers team in Week 10 before traveling to play the Saints in a monster Week 11 matchup.