Posted on December 10, 2013 by fromabrooklynbasement

In the conclusion of my Week Thirteen recap, I wrote that for me to even consider the possibility that the Niners could be a Super Bowl contender, they had to beat the  Seadderall P.E.D.-hawks at home on Sunday. The Niners accomplished that, beating the Seagulls 19-17, exacting a measure of revenge for two straight blowout losses at the hands of their division rivals and bringing their record to 9-4. So, with my liver still reeling from the punishment I gave it on Sunday (seriously, my body feels like I played in that game), let’s hand out some awards and take stock of where the team stands. 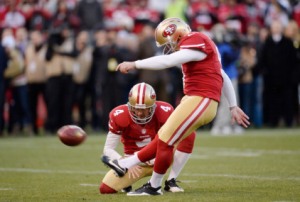 Giving the Joe Montana award to the kicker? You’re goddamn right I am! Dawson struggled in the first four games of the season, missing three of his first six attempts and prompting me to hand him the “Where Have You Gone Joe Nedney? Award. “Well, Dawson sure got his shit together: He has since made 20 straight field goals, including four on Sunday. Aside from the game-winning chip shot, he drilled two long kicks in the first half (one 48-yarder, one 52-yarder). If he misses either of those, this game could turn out very differently. Dawson was as cool as Cool Joe out there.

The Jerry Rice Award (Most Dominant Player on the Field): NaVorro Bowman

This award really goes to the entire defense: They held the Seagulls to just 264 total yards, contained Russell Wilson, and held Beast Mode to 72 yards rushing. They were particularly dominant in the second half: Seattle’s only points after intermission came on a field goal when they started a possession at the Niners 27-yard line following a long punt return.

With all that said, the biggest shout-out definitely goes to Bowman. He led the team with nine tackles and really set the tone for the whole game on Seattle’s first possession, when he absolutely destroyed a scrambling Wilson with a hit that forced a fumble that bounced out of bounds. When I conferred with my attorney after the game, he said he thought Bowman has been the team’s MVP this year—and I think I have to agree. I love “Kill that Motherfucker” Patrick Willis as much as anybody, but Bowman, who leads the team in tackles by a mile, has turned in a clearly superior season.

The Gary Plummer Award (For the Play that Shifted the Momentum): Frank Gore

Honorable mention goes to the first quarter blocked punt, the second time the Niners have blocked a Seagulls punt this year. But come on, you know which play I’m going to talk about. It’s GIF time:

On the Niners’ final possession, with less than four minutes on the clock, Gore, who had been mostly quiet up until that point, took a handoff 0n a sweep left, found a big hole (thanks to fantastic blocking from the O-line and fullback Bruce Miller), and then cut back all the way across the field, gashing through Seattle’s defense and past Pro Bowl safety Earl Thomas. He ran out of gas at the Seattle 18 after a 51-yard gain, but was smart enough to go down before he went out of bounds to keep the clock moving. It was unquestionably the play of the season—as my attorney said: “Gore saved Christmas.”

One of the magazines that I work for—when I’m not writing Niners recaps that no one reads—does at least one high-fashion photo shoot a month, typical with a celebrity actor or actress as a model. Over the weekend our art director and photo editor were in L.A. to do a couple of shoots, and on Sunday afternoon the model was Alison Brie of Mad Men and Community. As I said in my review of Season 6 of Mad Men, I love me some Alison Brie. But my casual affection for her transformed into an unhealthy obsession when our photo editor told me that his main job on Sunday afternoon was to keep Brie updated on the Niners, and that the second the shoot ended, she ran off the set and into the hotel bar to catch the last moments of the game. I like to think this is how she looked when the clock hit :00.

Ye Gods. I think I just had a seizure. Time to wrap this up.

Overall Rating For This Game (On a scale of Zero to Twelve Anchors, in honor of San Francisco’s favorite beverage): 8 Anchors

In the grand scheme of things, this game didn’t change the Niners’ prognosis all that much. Colin Kaepernick and the offense still looked impotent for long stretches, and couldn’t cash in on a number of early red zone chances. The Seagulls are still going to get homefield advantage, and the Niners are still most likely going to end up the six-seed in the NFC playoffs, meaning that if they can get past Wild Card weekend (it’s looking very likely they’ll be going to Philly to take on the high octane offense of the Eagles), they’ll have to beat the Seagulls in Seattle to get to the Super Bowl. That’s gonna be tough.

But we can hold off on those thoughts for at least one day, because man, that win was FUCKING SWEET. I will never hate any team, in any sport, as much as I hate the Dallas Cowboys, but this Seattle team has definitely earned it’s fair share of loathing (Pete Carroll may have found himself a spot on my prestigious “Top 5 People I Want to Punch in the Face” list). The best Anchor rating I’ve ever given a regular season game was the 8.5 Terrell Owens earned for repeatedly taking a shit on the star at midfield in Dallas in 2000, and the best rating I’ve handed out this year was a 7.5 for the exciting Week One win over the Packers. This one fits right in between those two, with 8 Anchors sounding just about right.

Now if you’ll excuse me, I need to take a nap. For a week.