Posted on December 17, 2013 by fromabrooklynbasement

This may come as a surprise to some, but I was very concerned about this week’s game. The Niners were coming off their biggest win of the season, the 19-17 Revenge Bowl victory over the SeAdderall PEDhawks, were playing against a Tampa team that is out of the playoff hunt but had won four of its last five (and had also nearly beaten the Seagulls in Seattle), and finally were playing an early start on the East Coast–a scenario in which West Coast teams historically struggle. All these factors combined to make this seem like a made-to-order let-down game defeat.

Instead, the Niners came out and stomped the Bucs, winning 33-14 and leaving me in a very good mood to write this recap. Let’s hand out some awards.

The Jerry Rice Award (Most Dominant Player on the Field): Colin Kaepernick

That’s what I’m talking about! For the first time since Week One, we saw the kind of performance from Colin Kaepernick that we were expecting this whole season. He kept plays alive with his legs, running for first downs and buying time to throw the ball downfield, and he made a number of impressive throws, including the howitzer he fired to Vernon Davis for a 52-yard second quarter touchdown. The numbers (19-29 for 203 yards and 2 TDs, with 39 yards rushing) aren’t crazy impressive, but he was in command of the game in a way he hadn’t shown since he detonated the Packers. In particular, he was able to make plays to convert third downs and keep drives alive–something that he hadn’t been able to do when the offense was going through its midseason doldrums. He accomplished this most of all on the 17-play, 10-plus-minute fourth quarter drive that salted the game away, buying time before gunning a 14-yard completion to Michael Crabtree on a third-and-12, then later scrambling for a 10-yard gain on third-and-6. It was the sort of game that made me say, before the season started, that Kaepernick is one of the most valuable players in the NFL.

The Niners put together a mostly dominating performance on defense. Tampa did manage two quick touchdown drives, one at the end of the first half and one early in the fourth quarter, but otherwise they did nothing all day. The Bucs gained just 183 total yards on offense (less than half the Niners’ total of 376) and converted just one of ten third down chances. Credit goes to the entire defensive unit, but the Smith boys were especially impressive, combining for three sacks and repeatedly breaking down the pocket to pressure Bucs QB Mike Glennon. Justin Smith’s sack was a particular Justin Smith sort of play, a display of Bear-like power that ended with him flinging Glennon through the air like one of those World’s Strongest Man contestants tossing a tire. 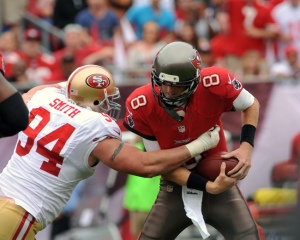 For his part, in the second half Aldon Smith put together one of those stretches of football that only he is capable of, blowing past Tampa’s left tackle on seemingly every play. I’m not sure why he gets on streaks like that and disappears at other times—he sort of reminds me of Buster Posey in the way he can get red hot and then suddenly go ice cold—but given the problems he’s had this year, it’s nice to see he’s still capable of that sort of  effort. 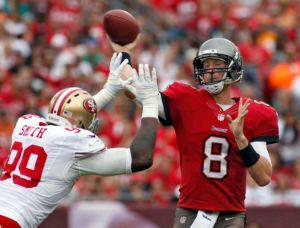 This looks like something that’s about to be painful

This award is named for the immortal Santonio Holmes, who in the Niners-Jets game last year hurt his foot after catching a pass, fell to the ground, and flung the ball away in frustration—only he hadn’t been touched yet, so Niners cornerback Carlos Rogers picked the ball up and returned it 51 yards for a touchdown. It’s one of my favorite hilarious football moments, and it was nearly matched today by Tampa linebacker Lavonte David. In the third quarter, Tampa jumped offsides before the snap and Kaepernick, knowing he had a free play, lofted a pass deep up the sideline for Vernon Davis. Davis juggled the ball and dropped it right into the arms of David, who got up and started running downfield, briefly stopping to jump and chest bump a couple of his teammates, then continued to the end zone for a touchdown—which he was largely able to do because no one really tried all that hard to tackle him, because everyone on the Niners knew the play was getting called back. It’s totally GIF-worthy:

Even better, the Tampa linebacker actually hurt himself during the return and ended up needing medical attention. The injury was apparently minor (I think he just ran out of breath), and David soon returned the game. But the whole thing was completely hilarious—even Kaepernick was laughing about it on the field.

Overall Rating For This Game (On a scale of Zero to Twelve Anchors, in honor of San Francisco’s favorite beverage): 5 Anchors

As I said in the intro, this was a game I was worried about. But the Niners put my fears to rest with a complete team effort. Between Kaepernick looking like last year’s playoff Kaepernick, the continued improvement of the receiving corps (Michael Crabtree caught his first TD pass of the season, Davis had that long TD, and Anquan Boldin had several clutch third-down catches, including a one-handed grab I still can’t believe I saw), and the defense’s general fearsomeness, this was an effort to celebrate. If that’s not enough, the Niners now have a legit shot to jump a spot in the NFC playoff picture: The Saints lost to the Rams 27-16 yesterday, dropping them to 10-4, deadlocked with both the Panthers and the Niners. The Niners lose the tiebreak to either of those teams, BUT the Saints and Panthers play each other next week, essentially guaranteeing that at least one of them will finish with 5 losses. So, if the Niners win out (their final two games are a likely cakewalk against the Falcons in the final game at Candlestick and a tough season finale at Arizona, who may be eliminated from the playoffs by then), they will leapfrog one of those teams. That’s potentially huge because, assuming they get past Round One, as a six seed they’d be guaranteed a Round Two trip to Seattle; but, as a five seed, there’s a chance they could put that nightmare matchup off by another week.

So, to sum up, the Niners improved their playoff positioning, and they played the kind of game that gave me some confidence that they could actually go on a real run in this year’s playoffs. I’m feeling better than I would after a run-of-the-mill Four Anchor win. Right now, I’m feeling Five Anchors.