Posted on September 22, 2014 by fromabrooklynbasement

Ugh. I don’t even have to say that wasn’t fun, because Jesus, anybody that watched the Niners get outscored 17-0 in the second half (making the aggregate score of our second halves so far this season a fan-fucking-tastic 52-3) knows that wasn’t fun. I gotta be honest, the way this game played out made me feel pretty pessimistic about the prospects for this team for the rest of this season. Let me explain why.

After such a disheartening loss, I feel the need to start with something positive: the bar where I typically spend Sunday afternoons, Finnerty’s, turns into a crowded, messy shitshow during Niners games. I do not say that as a criticism; I love the place. It’s just that there’s only so much the staff can do to combat the onslaught of drunken assholes—some  Bay Area transplants, some tourists from the West Coast who’ve heard about the bar on KNBR, some overflow from the Boston bar next door (I wish I was kidding. Dear Boston sports fans: Please go kill yourselves.)—that storms the gates on Sundays. But I want to give a shout out to the best bartender on the planet, my dear friend Annie, who I met when I started going to Finns back in 2010, who saved seats for my crew and kept the mimosas and Anchor Steams coming all afternoon. No matter what happens with the Niners, Annie, you’re the best.

The Adam Walker Award (Player Most Responsible for the Loss): The Secondary and the Offensive Line

I’ve said repeatedly that this season boils down to whether or not Colin Kaepernick can live up to his potential and play like an MVP-level quarterback. The really scary thing about this Sunday’s game is that it showed that might not be true, because Kaep played pretty damn well, and we still lost. He had a couple of possible interceptions get dropped, but still he went 29 for 37 for 245 yards and a touchdown, with no turnovers. He looked great when the Niners were in the no huddle in the first half, and he also ran for 54 yards—on a couple of occasions escaping sacks with scrambles that made him look like the quarterback version of Barry freaking Sanders. 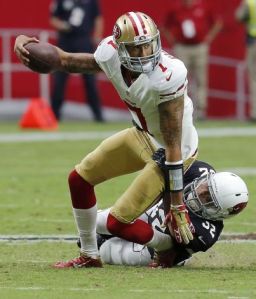 That brings up issue number one: The offensive line, a strength of this team throughout the Harbaugh era, has not looked good this season. Kaep was only sacked once on Sunday—though it was in a crucial moment—but he was hurried on more than a dozen of his throws, and was harried throughout the second half.

As bad as the offensive line was … the secondary: Ye gods. They got absolutely carved by Drew Stanton—DREW STANTON!!!—in the second half. Jimmie Ward got torched repeatedly, Chris Culliver for some reason can’t turn his goddamn head around on a sideline route, and Antoine Bethea seemed to fuck up the coverage on every play. The secondary has been a relative weakness for the last few years, and my attorney argued that our corners really aren’t that much worse than Carlos Rogers and Tarell Brown. I don’t know enough about the minutiae of NFL secondaries to really argue (although they sure seem particularly piss-poor to me so far this season), but one point my attorney did make that is totally valid is that the Niners used to be able to make up for a weak secondary with a devastating pass rush. Except now we don’t have Aldon Smith, meaning the Niners are blitzing a lot more to try to get pressure, which has led mostly to receivers getting open against single coverage and personal fouls on our pass rushers. Good times.

The Greg Roman Award (Because it might be time for Greg Roman to go): Big Surprise … Greg Roman!

I don’t get the offensive game plans at all. The Niners came out no-huddle, spread wide, which fits Kaep’s skills to a “T,” and torched Arizona throughout the first half. And then they abandoned the no-huddle. And even after they slowed the pace, where were the running backs? Frank Gore and Carlos Hyde (who looked like a monster on his second-quarter TD run) combined for nine carries. NINE CARRIES! The Niners seemed content to use Kaep as the main ball carrier, repeatedly running QB sweeps, which seems like a great way to get Kaep hurt. And we all know what happens if we lose Kaep: 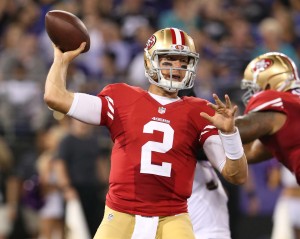 I thought this was a one-time award to be given as a rant against the posh new Silicon Valley digs of Levi’s Stadium. But then the Niners went and committed nine penalties for 107 yards, raising their total to 25 penalties for a mind-boggling 225 yards over the last two games. The two personal foul calls on Patrick Willis were completely insane—on the first one, he didn’t even knock Larry Fitzgerald down, and the second was a completely routine hit on Drew Stanton just after he released the ball. But the secondary committed several penalties that showed they haven’t adjusted to the league’s emphasis on downfield contact (or maybe it just shows that our secondary sucks), and Anquan Boldin’s 15-yard fourth-quarter penalty couldn’t have been worse timed, as it took the Niners out of first-and-goal at the five and led to a long-distance field goal that was blocked.

I could make Raiders jokes all day. And believe it or not, I really do try not to overreact to individual games, no matter how pissed off I may be about losses. But the crazy number of penalties the Niners have committed in the last couple of weeks shows an extreme lack of discipline, and I’m starting to wonder if maybe, just maybe, the coaching staff is starting to lose the players. I hate to bring this up this early in the season, but EVERYONE knows that this is a Super Bowl or bust year for Harbaugh. Is the team starting to see the writing on the wall? Are the players starting to check out? Does Harbaugh already have one foot out the door? We’ll find out over the next few weeks.

Prime Time is the only player to have ever suited up for both the Niners and Giants, so I felt it was important to hand out an award to note that not only did the Niners lose, but the Giants finished getting swept in San Diego with a pathetic 7-2 loss. The Giants are still probably going to get into the Wild Card playoff game because the National League is garbage this year, but they’ve blown any chance of catching the Dodgers, and they’re in danger of having to travel to Pittsburgh for that elimination game. The worst part is, unless the Giants can somehow take two out of three in LA this week, they’re going to have to watch the hated Dodgers clinch the division right in front of them. Great week for Bay Area sports fans!

Because after a day like that, you don’t even get to have a beer. Have fun at work on Monday.