Posted on September 16, 2014 by fromabrooklynbasement

That was a lot less fun than Week One. In fact, I’d go so far as to say that the second half of that game was the least fun half of Niners football since the first half of Super Bowl XLVII in 2013.

I’m also going to be honest with y’all: Even by my normal standards, my Sunday night at Finnerty’s was an inebriated, distracted shitshow of epic proportions. I’m not gonna get into details, but suffice it to say that I mostly wasn’t watching the game, except when the people around me would groan and I would look up to see a replay of Colin Kaepernick throwing an interception or Brandon Marshall scoring a touchdown. Let’s just give those two guys awards and get this over with.

The Adam Walker Award (Player Most Responsible for the Loss): Colin Kaepernick

Everybody knows that I’ve been driving the Kaepernick bandwagon since he usurped Alex Smith to become the starter with a fantastic performance on Monday Night Football in November 2012. That game was against—wait for it—the Chicago Bears, and Kaep, in his second start against the Monsters of the Midway, played the worst game of his pro career, probably his life. In the first half he killed two possessions in Bears territory with turnovers—one interception, one fumble—preventing the Niners from putting the game away. And in the second half he threw two more picks, each time giving the Bears the ball deep in Niners territory, leading to Chicago touchdowns. Credit where credit’s due: A couple of those interceptions were great, great plays by Bears DBs. But even on those plays, Kaepernick made terrible throws. 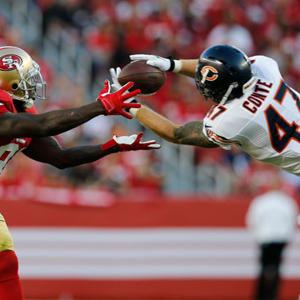 The crazy thing is, Kaep is so athletic, and so dangerous in the hurry-up offense, that even in a game where he was horrific, he still had a chance to pull off the comeback victory. If Crabtree—who Jim Harbaugh has repeatedly claimed has the best hands in the NFL (Brandon Marshall, I’m sure, disagrees)—catches that fourth down pass on the goal line, we might be having an entirely different conversation today. I’m not apologizing for Kaep. He was TERRIBLE in this game. But Tom Brady, Peyton Manning, and Drew Brees have all had four turnover games in their careers. I’m still on the Kaepernick bandwagon. But he was the biggest reason we lost this game.

I was tempted to give this to the officials, because JESUS CHRIST, but this one’s going to have to go to Marshall. The one reason for a Niners fan to fear the Bears coming into this game was the terrifying combo of wide receivers, Marshall and Alshon Jeffery. And the biggest reason I was hyperconfident about this game was that those guys were both hurt, with pregame reports saying the odds were 75 percent that neither would play. They both ended up playing, and for most of the first half they looked like guys who were hurt. Jeffery in particular looked like he couldn’t run at all. Then Marshall made that absurd one-handed touchdown catch right before halftime, and spent the second half just abusing Jimmie Ward. 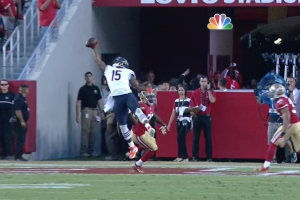 I feel like I haven’t quite properly expressed my rage about that game yet. Well, here comes the rant. First of all, those who watched the game on TV will note all the beautiful shots the broadcast showed of San Francisco. Guess what, NBC? THE NINERS DON’T PLAY IN SAN FRANCISCO ANYMORE! They moved 45 miles south, to Santa Clara, in an attempt to vacuum up as much of that sweet Silicon Valley cash as they could. Here’s what the “scenery” surrounding Levi’s Stadium looks like: 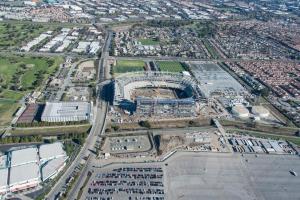 I can see Google!

So the Niners left one of the most beautiful cities in the world, where they had won five championships, to move to a shitty suburb full of rich douchebags trying to sell bullshit apps to even richer venture capitalist assholes (to be fair, this is what San Francisco itself is turning into). It’s the sort of thing that Al Davis, who sued the NFL to allow him to move the Raiders to LA because he wasn’t happy with the Coliseum, then just barely more than ten years later moved the team back after extorting the city of Oakland into building the atrocity that is Mount Davis, thereby ruining any chance that the A’s would ever get a new stadium, would do.

And what did the Niners look like in their first game at their fancy new digs? A team of felons (Aldon Smith is suspended, and Ray McDonald played despite an ongoing domestic violence investigation, a story that dominated the pregame broadcast, thereby taking the attention away from the fancy new digs). A team that committed an absurd 16 penalties for 118 yards (even if some of those penalties were bullshit, like the phantom holding call on Anquan Boldin that erased Frank Gore’s long touchdown, a disciplined team does not get 16 flags thrown against it). A team that turned the ball over repeatedly, lost its cool on the field, and generally looked dysfunctional, prompting scores of frustrated Jim Harbaugh faces that I’m sure non-Niners fans were gleefully laughing at during the game.

That’s right. They looked like the Raiders. The Santa Clara Raiders.

Overall Rating For This Game (On a scale of Zero to Twelve Anchors, in honor of San Francisco’s favorite beverage): 2 Anchors

Late in the second quarter I texted my attorney, “We have played like shit and we’re up 17-0. The Bears suck.” I stand by that statement. The Niners should have been up 28-0 at halftime, and instead they let the Bears hang in the game and then gave it away. The Bears suck. On Sunday night, the Niners sucked harder. The worst part is that we had a chance to grab an early division lead thanks to the Seabitches losing earlier in the day, and we fumbled the opportunity away like Kyle Williams trying to field a punt.