Niners Week Nine Awards: The Niners Suck and I Don’t Care Because the Giants Won the World Series Edition

Posted on November 4, 2014 by fromabrooklynbasement

The Adam Walker Award (Player Most Responsible for the Loss): The Offensive Line

Eight sacks. And even on the plays he wasn’t getting sacked, Colin Kaepernick was usually running for his life. This is after giving up six sacks against Denver two weeks ago. Way back in Week One—the last time this team actually looked good—I voiced concern about the Niners offensive line, and things have only gotten worse. The Rams have a good defensive line, led by Robert Quinn and Aaron Donald, but it’s also a front four that lost Chris Long to injury, so they’re not even at full strength. They compensated by repeatedly sending big blitzes, and the Niners never adjusted. I don’t know how much of that is Kaepernick’s fault for not recognizing the blitz packages, but the broadcast crew, at least, seemed to think that it wasn’t on him (John Lynch noted that Kaep barely even had time to set his feet on most plays). And of course, Roman and Harbaugh were unable to muster any effective countermeasures.

As I said to a few different friends during the game, if your O-line’s not good, your team’s not good. The last few years, this team’s biggest strength has been its line play. Blame the injuries, the holdouts, the lack of continuity, whatever, but the bottom line is, the Niners’ O-line has sucked this year.

And that’s not all! Highly regarded rookie Marcus Martin was making his first start at center thanks to Daniel Kilgore’s injury, and that went just swimmingly: three fumbled snap exchanges, including the one on the final play that ultimately cost the Niners the game.

(Honorable Mention: If the Niners had scored on their final possession, this award would have gone to Rams quarterback Austin Davis, whose two interceptions and general inability to read the defense or throw a half-decent pass kept the Niners in the game.)

On a podcast at the beginning of the season, Grantland’s excellent lead football writer Bill Barnwell told his colleague Robert Mays that Chris Borland could give the Niners 85% of NaVorro Bowman’s production this year. Mays practically laughed him off the air, and it’s become a running joke for Barnwell to plump for the rookie from Wisconsin, to the point where he suggested that the Niners should make Borland, who is undersized for a linebacker, a two-way player and start him at center for Kilgore. 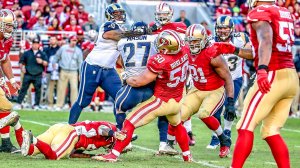 Pretty much the only play worth getting excited about

You know what? Maybe the Niners should just go ahead and try it. Because after today, I believe in Chris Borland. Filling in for the injured Willis, Borland had 18 tackles, including an impressive body slam of Tre Mason that probably would have been a 15-yard penalty, except the refs surely realized it was too awesome to sully with a flag. That’s the most tackles any player has notched in an NFL game this season. I’m not saying the Niners should ditch P-Willy or Bowman, but it’s nice to see a guy who’s been a punchline get his chance to silence the peanut gallery.

I mean, losing a fumble on the goal line on the last play of the game is the most Santa Clara Raiders play ever, no? There’s not much else to say, is there?

Let’s look at this realistically. At the moment, the Niners are 4-4 and in third place in the NFC West. What’s more, they’re tied for SEVENTH in the conference, and the team they’re tied with (New Orleans, who they’ll be playing next week, with yours truly in attendance at the Superdome) has an extremely easy path to the tournament thanks to the likelihood they’re going to win the terrible NFC South. With Arizona at 7-1, it’s highly unlikely that the Niners are going to win the West, meaning they’d need to qualify for a Wild Card. Now, the other NFC playoff contenders are flawed—the Eagles and Cowboys both have quarterback injuries, the Packers can’t run or stop the run, the Lions are depending on Matthew Stafford, and the Seabitches’ locker room seems to be about as harmonious as the Middle East—but there’s still a pretty good chance that a 10-6 team could miss the playoffs, and this loss may have fucked the Niners’ chances at even getting to 10-6. Given that the team hasn’t really looked good since Week One, I don’t see any reason why we should think the Niners are going to make the playoffs this year. And given the assumption that Jim Harbaugh was probably only getting a massive contract extension if he won the Super Bowl this year, and that he’s not going to want to coach as a lame duck next year, this loss likely signals the beginning of the end of the Harbaugh era—an era we’ll remember as a missed opportunity, in which we went deep into the playoffs three straight years, could have won the Super Bowl in any of them, and instead suffered three straight excruciating season-ending losses.

And you know what? I don’t give a shit. 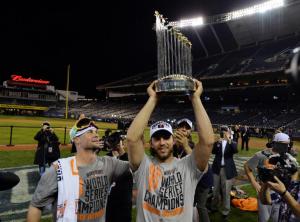 I don’t give a shit because Bruce Bochy’s Giants accomplished what Jim Harbaugh’s Niners failed to. They got deep into the playoffs, and when they had the chance, they dropped the hammer on their opponents. However unfair it is, we’ll look back at the Harbaugh Niners as a failure, because they came up just short. But 30 years from now, I’ll be telling my illegitimate grandchildren how great it was to root for the Giants these last five years. If you’re a Giants fan, you should savor this, because this sort of run is a once-in-a-lifetime thing. It will never get better than this for us.

In 2010 it was dominant pitching from Lincecum and Cain and Wilson and clutch swings from Ross, Uribe, and Renteria.

In 2014, it was Madison Bumgarner. Yeah, there were the Belt, Morse, and Ishikawa homers we’ll remember, the great at-bats from Sandoval, the bullpen heroics of Petit and Affeldt. But this will forever be the postseason when MadBum conquered the world.

This is the greatest it will ever be to be a Giants fan in large part because we just witnessed one of our guys put together the arguably the greatest postseason performance in baseball history. He threw more innings in a single postseason than anyone ever has. He went 4-1, and his only loss was a game in which he had a shutout going until he made a bad throw on a bunt. He pitched 21 innings in the World Series, including a complete game sutout in Game 5 and five shutout innings, on TWO DAYS’ REST, in the highest-leverage situation possible, in Game 7. His career World Series ERA is 0.25. Read that sentence again.

When Bumgarner came into Game 7, a friend of mine and I agreed that we were nervous. He was getting too much hype. He’d never pitched on two-days’ rest before. It seemed ridiculous to assume he was going to be invincible under these circumstances. And then he was. I think most Giants fans were hoping for an inning or two out of him. He threw five. After being a little shaky in his first inning, he settled down and proceeded to throw darts, not even allowing a base runner until Alex Gordon’s heart attack inducing single that Gregor Blanco and Juan Perez turned into a triple. And then MadBum calmly retired Salvador Perez on a foul out to end the game and the World Series. 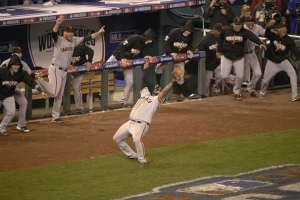 And it feels so good

The Niners get zero Anchors for their effort this weekend. The Giants? They get the entire motherfucking Anchor Brewery. 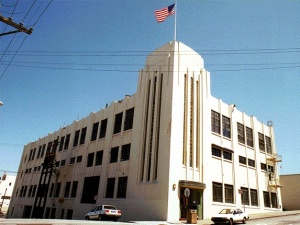 And may Potrero Hill smell like malted grain forever