Posted on November 13, 2014 by fromabrooklynbasement 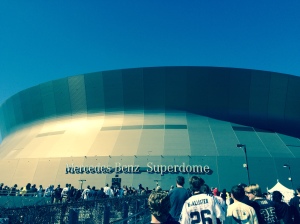 Longtime readers know that I love New Orleans and will take any chance to head down to the bayou. So, when my buddy Matt texted me a couple of months and asked if I wanted to go to NOLA for Niners-Saints, I said “Hell yeah.” (His response was, “Good, because I already got your ticket.”) And so, on my third trip to the Big Easy, I attended (believe it or not) both my first ever live 49ers game and my first event at the Superdome. What did I take away from the experience? Well, I managed to gain ten pounds and get an ulcer in the same week. I also watched a pretty good football game.

I traveled like a thousand miles to attend this game, so maybe I deserve this award, but I wanted to take a moment to give some props to the Saints fans. The Superdome is deafening—when the fans did the “Who Dat” chant at the beginning of the game, I thought the ceiling was gonna collapse—and it’s also a really fun environment to watch a game. It’s a big party, sort of like how people describe SEC games, and while I got a couple of Go homes shouted my way, most of the fans I crossed paths with were very nice.

Why name the award after Kate Hudson? Because these fans love their Saints almost as much as Penny Lane loves Stillwater.

The Gary Plummer Award (For the Play that Shifted the Momentum): Colin Kaepernick and Michael Crabtree

Let’s fast forward to the good stuff. The Niners were up 21-10 at halftime, but let the Saints rally to take a 24-21 lead in the fourth quarter. On fourth and 10, with less than two minutes remaining and the ball at their own 20-yard line, they looked cooked. On the fourth-down play, Kaepernick felt pressure and scrambled out of the pocket, rolling all the way to the right sideline, evading another Saints rusher, and setting his feet. I was sitting high above the end zone the Niners were coming toward, and as Kaep launched a ball deep downfield, I shifted my eyes and let out a gasp; Crabtree was 20 yards behind the nearest Saints DB, on the far side of the field from Kaep. The receiver had to come back for the ball—I’m willing to bet it traveled 70 yards in the air—but he made the catch for a 51-yard gain. 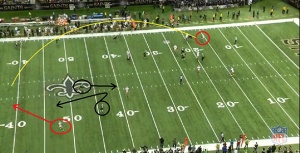 Three plays later, Phil Dawson kicked a tying 45-yard field goal. There’s a pretty good argument to be made that that play saved the season. Either way, it’s a hell of a throw.

The Saints’ ginger tight end doesn’t get this award for the two touchdowns he scored, but for the one he didn’t. On the final play of regulation, Drew Brees lofted a Hail Mary toward the front right corner of the end zone, and the 6-foot-6 former basketball player leaped into the air to catch a touchdown pass that appeared to win the game and almost made the stadium explode. Only, before the Saints could even begin to celebrate, seemingly every official on the field threw a flag. Why, you ask?

Because Graham blatantly pushed over Perrish Cox right before he made that catch. Then, after the game, Graham whined loudly to anyone who would listen that he hadn’t touched Cox. Sorry, Jimmy, you shoved the guy out of the way. You’re not allowed to do that. And your whining gets you mentioned in the same breath as the hated Emmitt Smith this week.

For the second week in a row, the scrappy Borland takes home this award, with 17 tackles, two of them for losses, and a clutch overtime fumble recovery that saw him almost dive under a pile to retrieve the ball and set up a game-winning field . 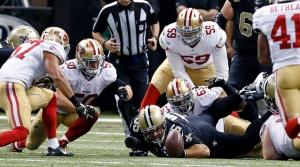 Look at the little guy dive for the ball!

Borland has notched 35 tackles in the last two games. If he kept that pace over a full season, he would collect 270 tackles. No NFL player has even had 200 tackles in a season. That’s just nuts.

Now for the bad news: He’s gonna have to keep it up, because the player he replaced in the lineup, the one whose name bears this award, Patrick Willis, is out for the season after undergoing surgery on the toe that has kept him out of the lineup the last few weeks. If that’s not bad enough, NaVorro Bowman was quoted is still experiencing pain in the knee he hurt in the NFC Championship Game last year. So even though Aldon Smith returns next weekend against the Giants, we’re probably not getting the massive reinforcements we were all hoping for.

But enough sadness. On to more linebacker-inspired joy!

See what I did there? Poetic Justice? Anyone?

Anyway, let’s start with what happened last year. You know, when Ahmad Brooks sacked Drew Brees late in the fourth quarter and forced a fumble that Willis recovered, sealing a Niners victory … only to have the refs rule that Brooks had hit Brees too high, and then give him a 15-yard penalty. The Saints went on to score and win the game.

The penalty was bullshit, and it had lasting repercussions: The loss meant the Niners finished one game behind the Seabitches, meaning they had to go to Seattle for the NFC Championship Game, a game they lost by the narrowest of margins. I do not think it is at all an exaggeration to say that that penalty cost the Niners the Super Bowl last year.

So, it was extra sweet when, in overtime, Brooks came around the edge and knocked the ball out of Brees’s hand. Borland recovered, and the refs had another chance to screw things up, going to a booth review … but they eventually ruled that Brooks had knocked the ball out before Brees’s arm moved forward. 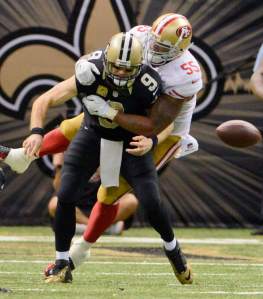 Revenge is a dish best served cold. Like sazeracs and oysters on the half shell. Speaking of which…

Tennessee Williams once wrote that “America has only three cities: New York, San Francisco, and New Orleans. Everywhere else is Cleveland.” I’ve lived in the first two, perhaps America’s most famous cities, and I can say without reservations that New Orleans blows them out of the water. 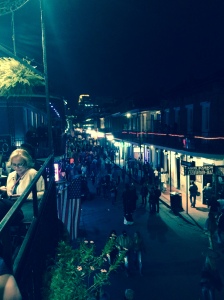 What did I love most? The four Po’ Boys (not an exaggeration) I ate in two days? The coastline’s worth of oysters and barrel’s worth of sazeracs (only a slight exaggeration) I also consumed in that time? The bourbon milk punches for breakfast? The awesome jazz band I saw at the Spotted Cat that got pissed because people were watching the LSU game instead of listening to them? The bartender in a pirate hat who served us absinthe? Randomly running into not one, but two friends I hadn’t seen in years? Sitting at the oldest bar in America, Lafitte’s Blacksmith Shop, and singing songs with a piano player who looked like she’d been there for all 300 years? The Du Monde beignets and cafe au lait the morning after?

All of it. I loved all of it. God, I love New Orleans.

Overall Rating For This Game (On a scale of Zero to Twelve Anchors, in honor of San Francisco’s favorite beverage): 8 Anchors

This may be an inflated rating, but the reality of the situation is that choking away the Bears and Rams games earlier this year has made it exceedingly likely that the Niners are going to miss the playoffs. So given how crazy and exciting that game was, and the Ahmad Brooks redemption, and that I got to be there for it, and it was in NOLA, that’s getting eight Anchors—pretty much the highest rating a regular season game can get.

Oh, and I’ll wash those Anchors down with another eight sazeracs. 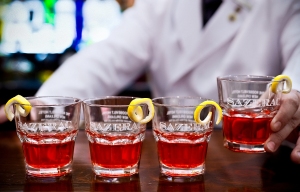