Posted on December 8, 2014 by fromabrooklynbasement

With the possibility of a playoff berth looking remote, the Niners had one mission left this season: Do not publicly embarrass yourselves by losing to your pathetic, 1-11 cross-Bay rivals. Sadly, they couldn’t even manage to pull this off, falling 24-13 to the Raiders at the Oakland Coliseum. How did they manage to do this? By becoming the very opponent they sought to defeat.

It’s been a running gag this season for me to recount the poor, sloppy, self-defeating plays the Niners have made in their various games by handing out this award. It started out mostly as my protest against the move to Santa Clara, and as a way to complain about how the team fell apart in its first game there, but I had no idea just how prescient this award would become. The Niners’ franchise is in utter disarray. The front office is openly at war with the coach, and everyone knows Harbaugh is getting canned at the end of the season, yet no one will talk about it. The coach is his usual evasive self, the GM never talks to the media, and the owner confines his comments to ominous tweets.

Thank you #49ersfaithful for coming out strong tonight. This performance wasn't acceptable. I apologize for that

The quarterback is a head case, immature off the field and incompetent on it. There have been high profile off-the-field problems—from the legal issues that got Aldon Smith suspended for nine games to the Ray McDonald investigation that led some to question if the team had an inappropriate relationship with the San Jose Police Department—and then there have been the on-field problems, ranging from the stagnant offense to the injuries to defensive stalwarts Patrick Willis and NaVorro Bowman. Fans have been calling for the offensive coordinator’s head for weeks. The stadium looks half-empty most of the time.

Now, what other NFL franchise does that sound like? I don’t even have to say it, do I? As my buddy Matt wrote during the fourth quarter: “To become the Raiders, you must lose to the 1-11 Raiders.”

Since I’m at a loss to explain how we’ve managed to out-Raiders the Raiders, here are some choice quotes friends offered before and after the game.

My friend and former guest blogger Tierney: “If you can’t beat the Raiders, you don’t deserve to make the playoffs.”

My attorney and former guest blogger Josh: “I’m pretty sure the NFL season stopped after the Niners-Cowboys game. The season was a huge success for the Niners.”

My buddy Alex: “My fantasy team sucks. The Niners suck. I’m going to switch to hockey or something for the remainder of the football season.”

My buddy Curtis: “Forget the score. This is the worst loss in Niner history.”

And, for some extra fun, I’ll pass the mic to a couple of friends who are Raiders fans for their thoughts.

My high school buddy and basketball nemesis James: “The Raiders have been playing well most of the season, they just can’t win. The 49ers have been playing like shit, but kept winning. I called this game a Raiders win back in Week 4. I don’t hate the Niners, but sometimes a little humility can help a team. With that being said, here’s a huge dose of it served up by my fuckin’ 2-11 Raiders.”

James also sent me this

And from my fellow writer and blogsmith Juan (check out his work here): Before today’s game, although there was zero doubt I would root for my Raiders, I was torn about what I was rooting for.  In theory, for the long-term, a loss was better for us because it would help ensure our shot at the top pick in next year’s draft, but then a win against the Niners would be exultant. Seattle tossed the Niners’ twitching body in the grave last week, and it would be sweet for us to toss the dirt over the rotting corpse, which is what happened in Oakland.  Christmas came early for me, but then I saw Harbaugh’s postgame interview.  He sounded like his family dog got killed.  It was fucking sad, man.  Just last year the Niners were inches away from winning the NFC Championship on CenturyLink Field (I don’t think they would’ve beat the Broncos, but I think they would have beat the Patriots in ’12), and now they lost to a 2-11 team that got shellacked by the Rams 52-0 last week?  Only peregrine falcons dive faster than that.

Juan did allude to one very Raiders-y thing that Oakland managed to do in this game: Winning on Sunday dropped them from the number one slot in next year’s draft to number five (assuming everyone loses out). The Raiders can’t even get losing right.

The Alex Smith Award (Shaky Play from a Quarterback Who May Not Be the Long-Term Solution ): Colin Kaepernick 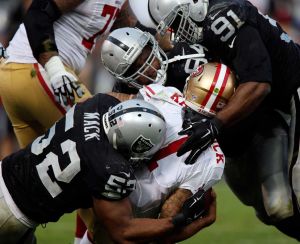 This pretty much sums it up

I’ve written so many words in defense of Colin Kaepernick on this blog that there’s no point in linking to all of them. Just search “Kaepernick” and you’ll find me writing something glowing about the guy. But right now, I’m pretty close to done. His numbers—18 for 33, 174 yards, 1 TD, 2 INTS—were Andy Dalton-esque, and they don’t even do justice to the hopelessness of his performance. He looked confused and out of control on the field. Yeah, the offensive line sucks, but both the picks he threw were TERRIBLE, especially the one on the first play from scrimmage, when he rolled left and spun and threw a ball straight to Raiders safety Brandian Ross.

In truth, it’s unfair to name this award after Alex Smith. The player Kaep has most resembled this season is former Saints and, yes, Raiders quarterback Aaron Brooks. For those who don’t remember, Brooks was a super-athletic, exciting player who had playoff success early in his career but was derailed by a lack of accuracy and a tendency to throw backbreaking interceptions. Read that sentence again.

To make matters worse, Kaepernick has kind of come off like a dick this year. He’s gone from being passive-aggressive toward local media to being openly hostile. Just read this. He acts like a spoiled little kid, not a team leader. Name me one great quarterback who has acted the way Kaepernick does. Job number one for the Niners’ next coach—whoever that is—will be to make Kaep get his shit together. Otherwise you can kiss the rest of this decade goodbye.

I knew so little about the Raiders coming into this game that I was shocked and excited to see that their punter is a black dude.

Is that a unicorn?

As such, I came into this game without any opinion on Derek Carr, except for a general lack of trust in quarterbacks from the Carr family. But in this game, he sure looked good: 22 for 28, 254 yards, 3 TDs, 0 INTs. Carr was poised in the pocket—he had way more time than Kaepernick, as the Niners didn’t get any pass rush all day—and he showed off a strong, accurate arm. It was the sort of A-game performance you’d want to bring to the table if you were, say, auditioning for a renowned quarterback guru who was standing on the opposite sideline and who might be your coach next year.

What I’m trying to say here is, Fuck you, Derek Carr. Harbaugh’s ours, at least until Jed York fires him this next week.

Why does it pain me so much that the Niners have turned into the Raiders? It’s not just because the Raiders have been the saddest-sack franchise in pro sports for the last 10 years. No, I particularly hate their former owner, Al Davis. Davis moved the team from Oakland to LA in the early ’80s. Then, when the city of LA wouldn’t build him a new stadium, he moved back to the Bay. He conned the city of Oakland into paying hundreds of millions of dollars to build the monstrosity that’s known as Mount Davis in centerfield at the Oakland Coliseum. A place where I had many happy childhood memories, that used to be a pleasant place to watch a baseball game, that once looked like this:

What the Oakland Coliseum used to be

What Al Davis, and then the A’s idiot owners, did to it

Aside from wrecking the Coliseum for baseball, the onerous deal poisoned any chance another team could get public money or will to build a stadium in Oakland (not that I think any city should give any team money for a stadium, but that’s another discussion). The A’s have spent at least the last five years longing for Silicon Valley, the Warriors are working on building a waterfront stadium in San Francisco, and there’s a chance that the Raiders, just 20 years later and now being run by Davis’s son, may move back to LA again. It’s an oversimplification to say that Al Davis may have killed pro sports in Oakland … but Al Davis may have killed pro sports in Oakland. As a former Oakland resident and someone who spent a big chunk of my youth in the East Bay, allow me to say, Fuck Al Davis. And Fuck the Raiders.

Needless to say, that performance gets zero Anchors. Not even Chris Borland (who had 14 tackles and is still awesome) could save us.

Instead of an Anchor Steam, I’ll pour myself a pint of the delicious California Common lager (a steam beer that can’t be called a steam beer because the Anchor Brewery trademarked the term) from Oakland’s Linden Street Brewery and sit and quietly drink and contemplate a lost season.